Wizard Rifle Here in the Deadlights 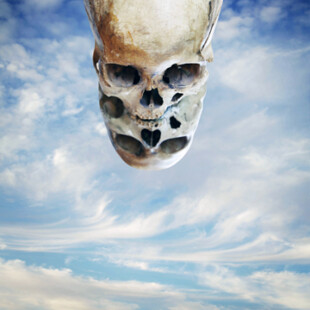 You're confronted by Big Business. You try and engage in conversation but something's up, Jared and Coady furrowed brows both, avoiding eye contact, edging towards you skittishly, beginning to invade your personal space. They're on a massive chemical induced downer and are wired with antagonistic paranoia. Just as uncomfortable traverses into worrying, something snaps, a Lightning Bolt-ish lightning bolt of rainbow mood uplift diverting them from their inward facing downward spiral.

And so passes Crystal Witch, the opening track on Here in the Deadlights, my first impressions of Wizard Rifle. This is a band fucking around in the peripheries of genres I love, flirting, frolicking and menacing with each passing step, yet somehow remaining lucid throughout.

Not quite sure what I have heard. Fairly sure I liked it. Must go back. Might give it ten minutes though, sit down and have a brew to reorientate myself before delving back in. It's not that it's unfathomably, unrhythymically batshit crazy - it is coherent, and wouldn't be dismissed as playful - more that by invoking many influencial pointers yet never honing in and settling on any, they're just unique I suppose. Which in my book is praise indeed.

Forums - Reviews and Articles - Wizard Rifle - Here in the Deadlights