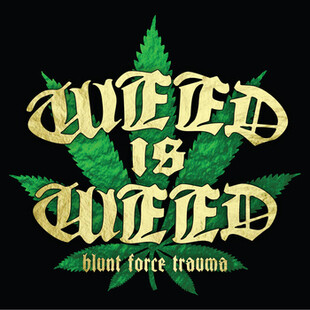 Weed is Weed are something of a supergroup, featuring as they do members of Pentagram, Spirit Caravan and Earthride. As such, with those behemoths of doom connections, this album, a re-release on Ripple after a limited run a year ago, is worthy of attention for any self respecting stoner rock doom junkie.

The unrelenting weed obsession quickly overtakes and unavoidably dominates your attention. Beyond the name and artwork, the lyrics are seemingly about nothing else. It's the back of a textbook doodles of the class stoner to whom there is nothing else in their blurred vision of life ("Weed is weed, so plant the seed, oh yes indeed"). Blunt isn't the word. Although saying that, it probably is.

All but one of the tracks (two to be perfectly honest, but as the other is a reworking of the first I'm not counting it) seem to be weed based - with the missing link being Eat Pussy, yet that too is unambiguously titular and a somewhat childish offering.

It's a shame that this dominates your thoughts as there is some decent raw stoner rock threatening to claim centre stage - the eponymous opener is fairly standard but enjoyable doom rock that inspirits reminders of Sixty Watt Shaman's late nineties under-heralded Ultra Electric album. There are southern tinges and the odd boogie stoner of Small Stone roster ilk pervading throughout, and the suitably gravelly vocal delivery is a strong point.

Ultimately though it comes across too much like playground posturing by spotty teenagers who have just had their first bong, and it's hard not to feel a tad underwhelmed by their one eyed approach that makes Bongzilla seem cryptic in their drug message and Snowblind practically unfathomable. I may not have focussed on the music enough in review, but you can forgive lyrical naivety if the music otherwise blows you away - it is telling that I cannot here.