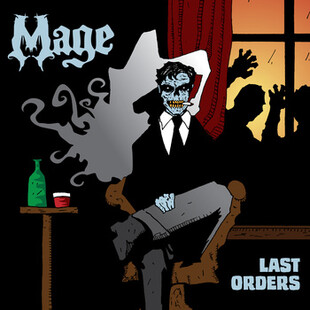 Mage make a welcome return with another strong, solid slab of metallic allsorts that mix infuence from stoner to thrash, built upon from doom foundations, released again on the ever reliable Witch Hunter Records.

There is a definite, and perhaps defiant old school feel throughout Last Orders, an album that could fit in with late 90's era of stoner rock, plus reminsicent of the early releases of Grand Magus (when they were still a doom band) or, for those with an indepth knowledge of that bygone stoner scene, Boulder or (more recently) Mangoo. When it clicks, such as on the opening Dark Matter, the trad doom feel, excentuated by old school metal vocal delivery entertains with exhilarating changes in pace, from chunky doom lethargy to a thrashier velocity.

It occasionally feels generic and in the wrong light, mood or coming to it straight from the more exciting of the new wave, it can sound dated but equally there will be many who adore this for reviving those times. This is a solid metal album, arguably unoriginal but with doom being stretched and evolved in all directions, pushing its extremities, this more traditional sound, with its stoner rock and thrash inputs keeping it ever interesting, feels strangely refreshing.