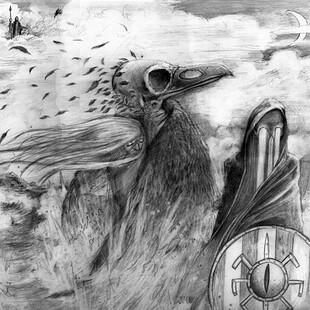 Spider Kitten may have surged into the UK doom fans consciousness over the last twelve months or so - with the addition of Chris West from the sadly defunct Taint, to the well received Cougar Club album and performing the opening set of the inaugural Temples Festival - but they have a healthy body of work and history behind them. Momentum seems to be with them right now, and this snappily titled three track is their latest release. It's quite possibly their best too.

Taking on a Scandinavian theme, Behold Mountain... is a concept album around Norse culture, and the whole feel of the record is suitably cold, epic and encapsulating. Lindisfarena holds steady to a simple, solid doom template, a dirty slow riff repeated satisfyingly. It becomes menacingly darkened, a musical correlation to the force of High on Fire's Viking warrior metal, an apt association given the subject matter. It is mightily impressive.

Bearded Axe is powered throughout by a bludgeoningly heavy Primitive Man style sluggish riff, battering you on your temples, the mood lightened only fractionally by the relatively clean vocal delivery.

Despite closing the album, Gore Swan is the magnum opus, encapsulating the concept. Split into three acts - Of the Land, Of the Sea and Of the Sky it is a fifteen minute minor epic, revealing itself like successive chapters in a short story. It starts with solemn lone acoustic accompanied only by the sound of distant crows crowing, before the entry of riffs that rumble in your gut, but again with clear vocals that can be heard above the thunder. This breaks to violin, with sea storm and creaking boat noises further painting the picture. It is impressively contructed, with the breaks construed nicely and lacking in pretention. It comes back moodier, slower, cymbal crashes like waves in a violent storm, almost Moss in it's oppresive depressive downward spiral.

This is to be released on Undergroove (who I didn't realise were still active) and with the news that they already have their new album written (around a new concept) and ready to record, Spider Kitten are a band on the move, and this is a fantastic record to further those advances. Behold, hail, venerate and bow before Spider Kitten.