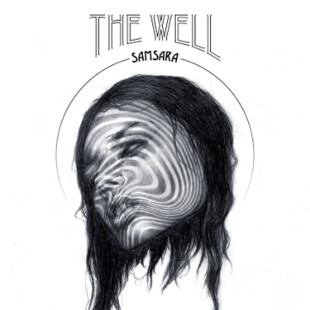 To pluck a figure out of the air, I'd say around 80% of new bands claiming to be doom nowadays fall into one of two categories - those worshipping at the altar of Electric Wizard (and/or Sleep) and those fully regressing to the proto/retro 70s stylings. The Well seem to lay claim to be both, so it's interesting to see if they create a niche between the two camps.

Early impressions formed are that The Well fall into the latter grouping, with a love for the occult and horror films accounting for the former. It starts really well, Mortal Bones portraying the necessary groove of Uncle Acid et al, without wholly subscribing to the overblown self indulgencies of others who pretend to believe the last 40 years have never happened. It's almost refreshing in this fact. There's psych in there too, blurring the edges nicely. Trespass continues the welcome vibes with a nice simple riff that's repetitive in that good way which hooks you in, a bit Kadavar in it's doomier ends.

From there on though it all goes a bit downhill, although not steeply, but enough to dampen the spirits raised from the beginning. Too much passes by without enough intrigue, while Lucifer Sam just feels bad, like the White Hills stripped of all their psyched intrigue. There's flickers of hope in Refuge, starting all doom and gloom before entering a Blues Pills groovy passage, but fades, while Eternal Well has some harsher riffage that is decent. Dragon Snort begins with an almost sludgey riff but is tellingly let down by sounding too thin to carry off the full heavier aspects of doom they aim for.

The modern retro doom completists will need to check in here, as it has it's moments - especially at the start which make you believe you're on to something special. But unfortunately, despite hinting at an original identity with an optimistic start it is too patchy to fully recommend to the casual observer looking for the next big thing.