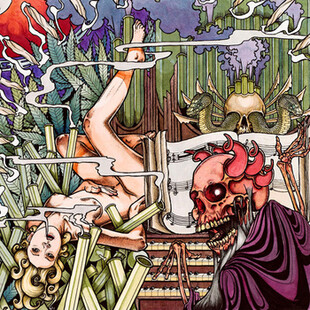 "And in this kingdom thus created, this dense realm of doom, this insiduous incestous nomenclature weed hazed utopia, so it is that there be a band named Dopelord, and o, they shall be spellbound at the altar of Electric Wizard and revel in their unholy infatuation with the weed to almost Bongzilla like obsession."

It's not difficult to picture where Dopelord's place in the world is, and all pre-conceptions prove entirely correct, a book cover judgment justification. The name is familiar, I'm sure I've heard them before but then perhaps it's a song title, or simply the feel that it just fits. Yet while I joke about the enclosed nature of the genre boundaries, it is still a music to ensconce yourself in, and Dopelord prove more than value in this regard.

Black Arts, Riff Worship and Weed Cult is packed with head nodding doom goodness, the slow simple downtuned riff dominant, but also with a stoner rock sensibility throughout hoodwinked into each track to evolve them into much more than darker than thou droning menace. That's not to say it doesn't weigh heavily in the ears - it is heavy at all points - but it's the catchiness that makes this so appealing.

Addicted to Black Magick, complete with obligatory horror sample opening, contains a riff so groove filled it's impossible not to be drawn into the album immediately, despite the vocals lacking a little - while not terrible (which could really ruin the mood), they're close to being spoken and it is the weakest bond in a few of the songs. Preacher Electrick slows it down, but in grand manner - the overall sound is excellent and a big step forward from their debut album (which I've subsequently checked out).

To be honest there isn't a weak track here, each offering something a little different (relatively, in doom terms) and all focussed on the riff (with the faster paced Green Plague perhaps being my favourite). While there's obvious originality issues, and a few technicalities that could be improved on, the main thing to report is that this is simply a very enjoyable doom record, consistent in quality throughout it's 40 minutes, more intelligent than you might give credit for, and one I'll no doubt reach for again and again.