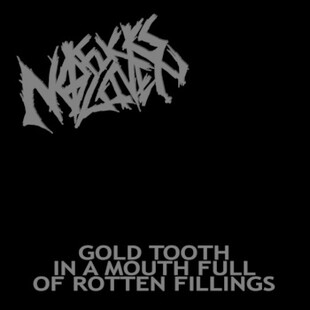 If you have about twelve minutes to spare, you could do worse than crank this up. Stupidly fast, wickedly immature and containing enough diversions in speed and daft samples to warrant more than a passing glance.

An Easy comparison would be Narcosis (Paul Priest, King of Leeds is on bass here), but there's an angry, indignant scorn poured on here that lifts NFG higher than most grindcore you'll hear these days. There's even a bit of old school UK rave or donk dropped in there at the start of the delightful Nation of Cunts that raises more smiles.

This is the musical equivalent of a temper tantrum at a gun rally, it's an amusing, but ultimately deadly idea. The constant samples keep you listening, trying to guess where each one is from.

It's succinct, hilarious and brutally delivered, what more do you want?