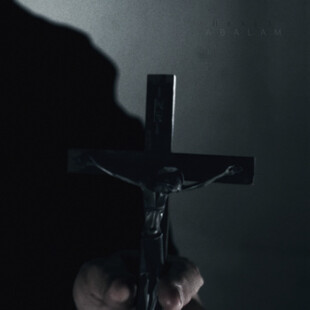 Press release and bandcamp tags declare Hexis to weld hardcore and post metal influences into black metal. I've written recently elsewhere how this experimentalism within the black metal sound has piqued my interest of late, so won't go into that again, but safe to say I was keen to get stuck into Abalam.

It's quickly clear that this is a darkened album consistent in sound, not chopping from influence to influence. But the differing genre stylings are certainly axiomatic - there's a manic hardcore fundamental building block within the asphyxiating black metal swarm of locust high end racket, akin to the rabidness of Brits Palehorse or Hammers for example, reimagined after that nasty biting incident down a dark alleyway with a vampire Fenriz.

It is evident in the shortness of the tracks, such a definitive feature of the album. Of the 13 tracks, only four reach three minutes, only one passes four. Songs are never allowed to breath, evolve or plateau creating a relentless barrage, that while occasionally muddies from one track to the next, generally keeps you gripped, pushed back into your chair, unable to move, not that you would if you could for fear of missing a beat.

There are a few intermission, industrial style break ups that add to the bleak atmosphere rather than dampen it. While a few too many tracks rush by without leaving a lasting individual impression, the album is most certainly best devoured whole. Not that there aren't stand out moments - Tenebris the leading example, or Exterminati's brief hardcore blast.

An excellent, threatening and black hearted beast of an album that'll leave you in immediate need of sunlight and fresh air to come round from.