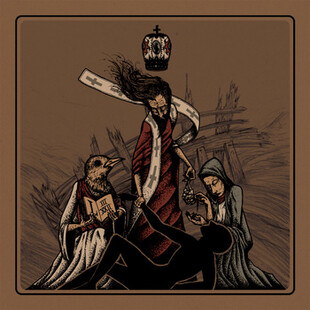 Two accomplished bands and ninehertz repeat offenders offer up a behemoth of a sludgy split LP to the deities of doom.

I started off on the Bastard of the Skies' side, which starts kind of weirdly and abruptly - the first thing that strikes me though is the multi-tracked gravelly vocals, vocals that really drew me into this record. This record just improves as it continues until it plateaus into the atonal euphoria of the esoterically named sludge freak-out Bao Fu - the drumming is headbandgy as “Fu” too. It has quite a grunge quality, an element of the downtuned White Pony era Deftones interzone. Also worth saying that it is reminiscent of Undergroove Records' bands like Miramar Disaster or Sika Redem. The more I listen to this record, the more I like it and get it and on repeat listens (which it stands up to) it becomes clear how accomplished the production is and how at ease this band are with their own sound.

The black dog, Grimpen Mire side is like a creepy jack o’ lantern boggart light shining across Conan Doyle’s fabled namesake - the quaking mass of Dartmoor shaking under malignant (and really complimentary) dual vocals. Grimpen Mire have quite a true doom sub-blues retro quality which is really ace against their peculiar and particularly bleak sound. My favourite track is probably Vermin Hive as I think it really shows these elements off well, also has this really awesome (almost) spoken word howl bit toward the end. Where Grimpen Mire really come into their own is the quiet-loud mosh pit moment, also harmonics, also the vocals sound ace- I can’t really choose, another seasoned band who know exactly how to do it well.

When it comes to split LPs/EPs my favourites are records where both bands compliment each other’s sounds. Split records makes sense from a DIY perspective as its cheap and clues up fans of either band that may not have encountered the other. I’d be really eager to see both these bands live as I’m sure as total pro’s they would both sound great.