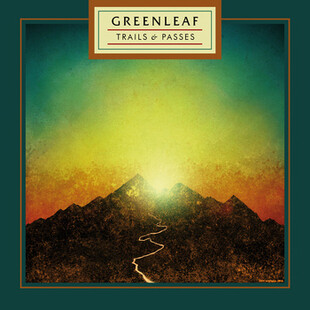 Two years on from their last album, Nest of Vipers, Greenleaf return earlier than usual. Being a side project of sorts, featuring members of many of the Scandinavian stoner rock scene bands from the early 00s (Dozer, StoneWall Noise Orchestra, Demon Cleaner and more), has lead to infrequency in output previously. Meanwhile, Oskar, of Truckfighters, has now vacated vocal duties, presumably to focus on his day job.

Nest... had some highlights but was a slightly frustrating listen, never kicking on into the great album it could have been. But something unexplained but fundamental has changed, with Trails and Passes Greenleaf have grown into their sound, assuming control of their destiny with what seems like a more dedicated attention, to go a long way to meeting their potential.

The album has an aura surrounding it from the off - I want to say an air of cool, but it's more an understated, relaxed and assured approach which creates a welcome atmosphere that permeates the listening experience throughout. The opening Our Mother Ash is frankly superb, hinting towards a taking on board of a Graveyard influence to song writing, but not overly so as to invite claims of changing tack to suit the times. Ocean Deep is a beautiful follow up, cementing that vibe, grandiose but never overblown; restrained, ably suited to new vocalist Arvid Jonsson's approach.

There is variance from the almost placid mentality, the Clutch-ish playful riffs in Humans and The Drum invoking a quickening of pulse. The penultimate track Bound to be Machines is excellently crafted stoner rock whichever way you look at it, with a riff that could sit well on a Truckfighters album.

I may have overstated the mellowness of the album, it isn't necessarily in the sound itself, but instead in it's DNA, from Jonsson's controlled vocals to the settling mood it creates. It has a couple of weaker moments where that encompassing feel doesn't travel over with, but on the whole Trails and Passes is an excellent album. To my mind, it's Greenleaf's finest hour, and the best stoner rock album by anyone of 2014 to date.