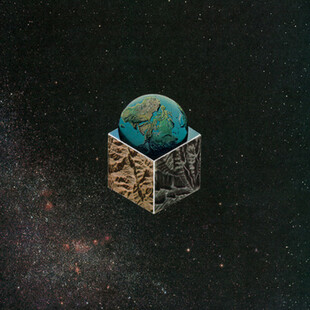 Easterfaust by The Cosmic Dead is an electrifying psych freak out.

It's relentlessly bass heavy two tracks clocking in around the 20-minute mark each have a lot of scope and depth for relentless virtuoso riffage and psychedelic negative space.

The squalling psych feels very retro and analogue, like an overdriven kraut inspired LA Woman era The Doors but instead of Jim Morrison's sixth form poetry, the distorted insano vocals are supplied by Don Van Vliet being contacted through a Ouija board.

Whereas the opening track starts off from near silence building into a palpable high, the b-side is a slap round the chops from the get-go with virtuoso riffage and theramin-like psychedelic whirrs. Both parts mutate, swerve and get crazy from synthy Boards of Canada spaced out segments back to the relentless kraut bassline and freakout drumming, trippy.

Although evocative of some 1972 'Nam acid interzone, it never feels like the band are attempting worn out pastiche, to me it feels very current, interesting heavy music delivered with passion.

It's a super enjoyable listen too - truly cosmic (man) and dead awesome.