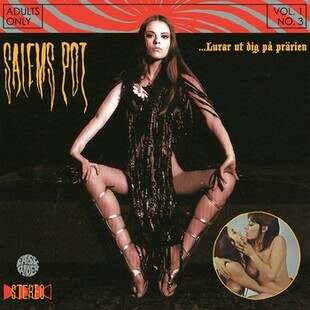 In name, album artwork and track names, Salem's Pot channel the high camp of a Saturday matinee double of a lost Hammer Horror and a Russ Meyer sleaze fest. Before you've had chance to press play they have set up their stall, a picture has been drawn in your mind. It'll likely be an accurate interpretation too.

Three songs, all nine minutes plus, all drawn out morose drugged doom. Electric Wizard provide the blueprint, so much so that bringing in other references seems like a distraction - perhaps the darker elements of fellow Swedes Ghost, the old school of Pentagram, but that's stretching it - no, this is the Dorset doom demi-gods worship all the way.

What Salem's Pot provide is plodding occultism, without the killer passages to draw you in and trip you out. Occasional and brief flashes suggest that a smoke-assisted run through could elevate and transport you to otherworldy realms, but in the cold sober light of a working weekday it leaves you unmoved, and too often bored. While knowingly hammy, it is unwantedly hamfisted in its dramatisation of its cultural influences.

Looking for the spaced, trudging slog of the densest Electric Wizard moments, complete with Jus Oborn aping vocals, but without the immense riffage, heaviness and connection? Thought not. It's not as terrible as I'm making out, and mimicry alone is not necessarily a bad thing, but without even phases of the musical magic their image alludes to, ...Lurar Ut Dig På Prärien fades into the darkness without a fight.