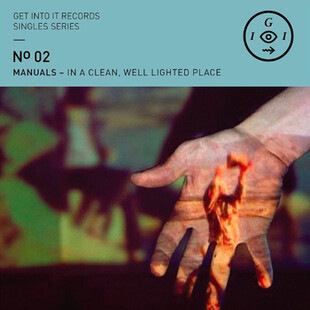 Having not heard of or heard anything by 'Manuals' before, I was pleasantly surprised listening to the big wall of sound coming back out of my speakers on a cold Monday morning.

A little research later told me it was made by but two men; Andy, thumping the tubs and Alex, plucking the strings (and stomping on a good number of pedals by the sound of it too!)

This is the Leeds-based band's first release you can hold in your hands, but you'll have to be quick because it's a limited run of 60 and you'll have to get the tape deck out of the loft to play it!

A clean, well lighted place is release #2 on Get Into It Records' Singles series of cassettes and it's a barnstormer of a listen too. Side 'A', the title track, is full of energy and frantic guitar, with punchy drums later greeted by angular guitar riffs hidden under a wall of fuzz. All the hallmarks of a good noisy indie/punk/emo riot come crashing through with a bit of classic quite/loud thrown in for good measure.

More of the same for side 'B', A Room of Our Own. A pretty middle section to this one builds to a big pedals on noisy riff with howls of feedback, sound bites and loops and swells. The vocals come into the mix on a par with the instruments, adding another sound rather than being a focal point to the song. A stompingly good, nod along riff is what I would imagine Cape Canaveral songs sound like if they were being played by Lightning Bolt!

A very enjoyable listen from a band I'm looking forward to catching live.

PS. If you've binned your Walkman you can always get it off t'internet!