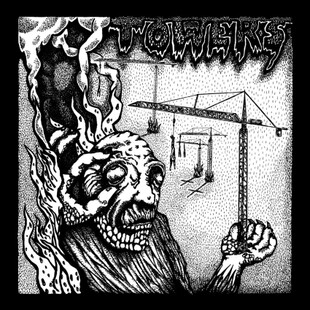 Portland bass and drums duo Towers are a terrifying prospect. With a fully analogue recording, II is frankly just as dark a release we've ever heard from just two people.

The release begins with the wholly entrancing Hell which draws you in slowly, before creeping up to an almost crust speed, but still maintaining harrowing levels of murk. The vocals sound like a fevered troglodyte trying to warn you that Portland has become a plague pit and to turn back. Lyrics are fucking fantastic, delivered in a crazed spit-flecked manner, they talk of people on horseback riding towards the sun and mumbled lines about flesh. It's like someone's stepped on King Diamond's neck and told him he can only do Eugene Robinson impressions and can only be in sludge bands now, amazing.

Even when things go quiet, as they do towards the end of the first, 11-minute track, electronics and static are still hanging in the background like unhinged killers and there's really no let up.

The Door At The End Of The Hall sounds like the name of a B-Movie horror flick title and sounds like one too. It's scrape and relentless aural assault is hard to bear at times and it seems almost to set you off balance. The non-stop chugging and slightly mis-timed counter-rhythms actually giving a sense of nausea to proceedings.

I have mixed feelings about this whole release, on one hand it's amazing and I want to let it take over my mind. On the other, I'm afraid of what it might do to my overall mental health.