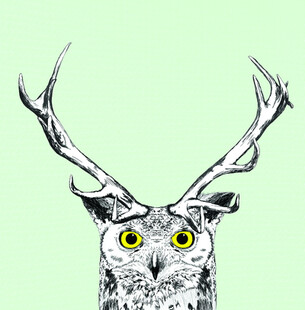 Mononoké are a fizzing, complicated band to listen to. Equal parts jazz, proggish attention deficit and mathy awkwardness, it's apparently two years' worth of practicing and refining in order to get what they want out of these four tracks.

A York three-piece, you'll find Matt Dick, formerly of doom-esque progsters Tear Gas and Plate Glass on bass, laying down a sometimes jaunty, sometimes consciously heavy line for the others to follow. The nearest reference points where it comes to contemporaries is probably Oxes, but this is more complex and challenging, never really following the same path twice. A full on groove might hit you in parts, only to fall away into time signatures so obtuse you'll feel as if you're being jerked one way, then the other.

Produced with a warmth you wouldn't expect of such spindly and snake-like rhythms, it's actually surprising to find it's recorded by Chris Fielding (now of Conan and their Skyhammer Studios). However, as the band explain within their press bumf, they were attracted there for the analogue nature of recording and you can hear that in the music. Make this genre digital and binary and it would lose a lot of tone and feeling. The drums in particular are so clear you can almost hear the air being cut by sticks. Every pitch bend the spider-fingered guitarist attempts too is captured with an almost perfect clarity too. It feels like being in the sweet spot at an extended jam between three people who are locked in tighter than they'd probably care to admit.

Not easy listening by any stretch, but it's certainly an intriguing Rubik's cube of an EP. Don't wade in if you find self-indulgence a turn-off, you'll simply have to turn back.