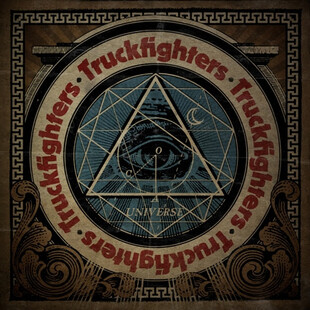 Confession time, I've not listened to Truckfighters since around 2006ish. I really enjoyed Gravity X when it came out in 2005 and saw them on their UK tour following that twice, loving every moment.

For some reason, I failed to keep up with them, 2007's Phi and 2009's Mania seemed to pass me by, so we come to, shamefully, my first listen to the band in eight years. What I remember from Gravity X is a straight for the cranium riff explosion, so I'm surprised to find a bit more nuance about Truckfighters in 2014. Universe has a definite stoner rock sound, but has a metallic and sharpened feel to it as well. Like they've been listening to fuzzy grunge like Dinosaur Jr or something. Mind Control is like a precise rocket to the brain and hooks you in within the first few minutes. The Chairman rocks with a similar intent, but contains a hell of a slew of twists and turns. I'm not sure if it's the bass or one of the guitars set to Fu Manchu throughout, but this is a good thing, it's kind of 80s power pop-esque in it's boldness and fits well with the overall towering sound on display here. Vocals are also as melodic as in 2005, lending them a laid-back element to their heavy, but intricate sound.

By the time The Prophet rolls around, they seem a bit more relaxed, there's still that fat bass sound that permeates everything, but this is more reminiscent of fellow Swedes Dexter Jones Circus Orchestra, a bit more trad stoner, covering classic rock ground at times. The lyrics here seem whistful and contemplative, sounding almost like half-awake protestations at times.

Dream Sale is quite mature-sounding too, lyrics seem to be about what paths you take and perhaps influencing others Could Truckfighters have mellowed with age? It certainly seems like it. They still kick your teeth in, but there's a creeping doubt or something in the way here. Is this what happens when stoner rock bands stick to their guns for this long? It's still really, really good, but it seems like a softened version, like watching a new Star Wars film if you grew up with the classics, the essence is still there, but maybe it doesn't hold the same charm now time has moved on.

Closer Mastodont might change your mind, its epic thirteen minutes walks a proggy path, starting with stompy, fat notes before giving way to a desert cruise before going off into a furious instrumental dip in a tar pit, all solos full of funky energy and metallic edge. It's a strange way to finish an album that up to now has seemed to pull its punches, but more than makes up for that with several crescendos that hit the spot.

A strange album then, where I've doubted their commitment and then had it reaffirmed within moments. This feels like one to play on repeat until its full potential is revealed. Thanks for making me work hard for this Truckfighters, it's a real head-scratcher.