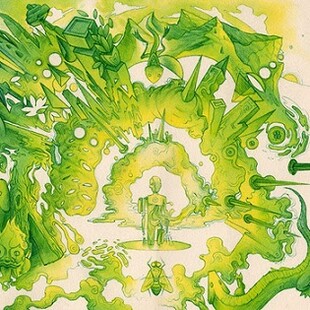 Hotel Wrecking City Traders have had to evolve and develop to remain fresh within the relatively tight constraints of being a two piece instrumental act, especially as they are, or at least were defined as a stoner rock band. The ominous shadow of the authoritative Karma to Burn lurks over anyone trying this - playing stoner rock without vocals places a higher tariff on the need for big, catchy riffs and to do this within the genre confines is almost inevitably leading you to comparisons to the West Virginians. Many of a similar set up ventured into post rock territory to broaden their sound.

HWCT haven't followed this trajectory, yet still feel exciting, with each new release offering something different, each album better than the one before. Ikiryo is their best yet; varied, well produced and constantly, definingly interesting. We've been into them for years - I reviewed their self titled release in 2007 - and it is fantastic to see these Aussie duo be so productive, growing as a force.

The album is complete, each track bringing something different, but there are definite highlights. Riley is the heaviest offering, both launching themselves at their instruments in the opening giving way to an ever brightening sound, a metal attack fuelled with punk spirit. The stoner vs post metal instrumental issue is resolved by not really channeling either. There's even an early Deftones semblance on a couple of tracks, most notably on the excellent Breath, which sounds massive. The closing title track, over thirteen minutes long, is the closest it gets to brooding atmosphere, but never subscribes to the quiet loud quiet post- mantra, and in it's opening creates something moving.

This is a fine release from a band full of ideas and riffs maturing profoundly. They're in the UK in April (including a slot on the Desertfest bill), for the first time I think - Ikiryo guarantees they'll be shows not to miss.