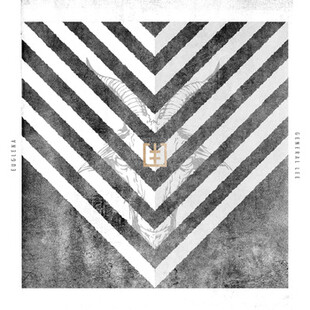 This coming together of Russian (Euglena) and French (General Lee) bands on Bsaement Ape Records is deeply unpleasant.

From the off, Euglena set out their stall. It's one of cracked paint, rust and relentless grind. Drums blast across the surface while buzzsaw guitars and retching vocals rise up and strangle. There's a Converge influence here, but one that remains stuck on one mode, kill.

Their second track Желчь has moments of swirling hatred as some kind of respite, but there's an detached, creeping insanity in the unusual timings and the headrush moments they create. Equal parts grind, 90s screamo and chaos, it's a wonderfully intricate pair of tracks that melt the eardrums.

General Lee have a lot to live up to, but thankfully they have a much more angular approach to their sound. Like Daughters thrashing their wrists near the top of the fretboard, they also have a post metal feel, like a fired-up Keelhaul or similarly disparate bands who carve their own mark on proceedings.

The clamouring and non-stop venom dripping from For Our Grand Ignorance serves to make this a more challenging listen than Euglena, but the bands' styles are certainly married in some strange way. They delve further into Neurosis territory later on in the track with some blissed-out tribal stylings also reminiscent of the never-ending groove of bands like Rosetta.

A dizzying display of recent influences creating even more wondrous pairings of talent worldwide. It's demanding stuff, but one you should take a serious listen to.