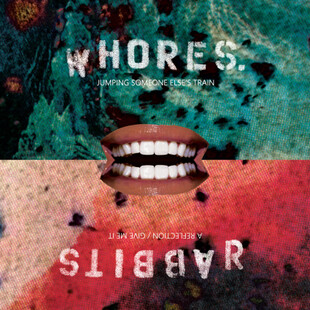 Whores are a three-piece who include a bassist from Norma Jean, but as we've alluded to before in the past, this is not a metalcore chugfest deal. Nope, Whores are a noise rock beast that combine a mean line in laboured riffs and some pretty intense lyrics that rope you in quickly.

Their half of this 7" is the exquisitely executed Jumping Someone Else's Train no doubt a song about feeling you are on the wrong track in life. The odd time signatures here give it a slightly staggered feel and an addictive if confusing groove. Not many bands can give this much thought to a listener in just five minutes. Well played.

Rabbits come in with a much more darker side to the limited wax (100 pink/400 black) and their opening track A Reflection which is stark and wavering, threatening to burst into life but stopping before the inevitable burst of release.

Give Me It their second track here fares better, with screeched vocals over a similarly dark background is a stab in the dark from an unknown assailant. It's densely packed, with whisps of feedback being eked out between notes while the drummer pushes at the snare in strange, unnerving ways. It almost has a black metal aesthetic at times, but remains locked onto a nervous, stuttering whole too, impressive. This is a band to keep an eye on, if their albums produce this much adrenaline, the world is in for a treat.