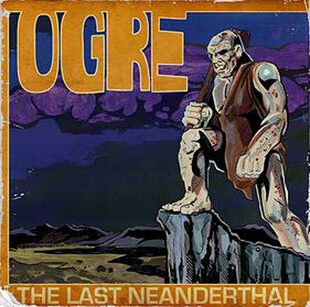 Ogre have been around since 1999, but one listen to The Last Neanderthal might suggest they have been round since 1969. The Black Sabbath/Budgie references in the PR babble that accompanies this release is spot on. Big denim-clad bass walks jauntily with some fuzzy axework and some big, opened up vocals that mean it's as groove-laden as it is upbeat.

This is the perfect lift if you thought you'd had your fill of Sabbath-esque metal, but thought the creative pile was diminished. Solos that ring out on tracks like Nine Princes in Amber mean it's retro in the same way that bands like Witchcraft are, taking a production value aesthetic while combining it with something altogether new and engaging.

They even evoke Electric Wizard comparisons at times, the sluggish and half-paced Bad Trip is like a less fuzzed-up version of something from Come My Fanatics without the sense of misanthropy and self-destructiveness that E-Wiz carry with them, nope, this is a beaming smile of an album. But then who said stoner rock or doom had to be downbeat? This sounds celebratory and is a welcome diversion from miserable and dour bands that exist in their hundreds worldwide.

The vocals deserve a mention, singer/bassist Ed has a Tom Petty-style drawl that gives it a unique feel, especially when they take the interesting decision to cover an old 70s bar band of the same name on Soulless Woman which twists and boogies its way round the dance floor, complete with cheesy solo intact. Even though it's slightly more camp and glam than the rest of the album, it's a good fit and hopefully does the original Ogre some justice.

This really is a rip-roaring release and also marks the reinvigoration of the Italian label it appears on, Minotauro Records, which has released bands like Death SS and Paul Chain since the 1980s. If Ogre are the benchmark, this should be a label to watch.