Junius Days of the Fallen Sun 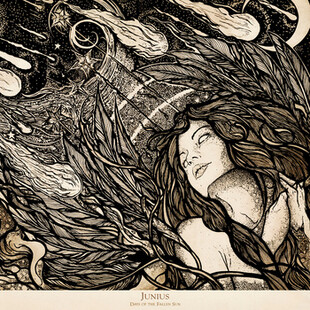 Being almost permanently behind with new music, Junius are one of a small number of bands where I can say I've been a fan since the start. I went so far as to mail order their first self titled album (actually their 1st 2 EP's mashed together) from the States and stayed up until midnight on launch day to wait for the digital release of their 2nd album, The Martyrdom of a Catastrophist. Their 3rd album dropped in October 2011 and I toyed with the idea of reviewing it but ultimately decided not to. I didn't like it. Still don't. The sound was huge but the small nuances that made the songs special were missing and it was like the 2nd guitar was gone from the mix entirely, leaving the album with a mid tempo, lumbering and tired feel.

But we're all flawed. You don't dump a girl the first time she rolls her eyes during the weekly Die Hard marathon and one OK album shouldn't put you off. Thankfully, Days of the Fallen Sun is more Die Hard With a Vengeance than Die Hard 2. Days... remembers that it was the interaction of the instruments that made the band interesting rather than purely suffocating instrumentation. Not that the heaviness has been dialled back much, merely the melodic lines and textures are back in their rightful place rather than buried or absent. It's these aspects that give the bands sound it's otherwordly feel, mainly in the form of their often used synth choir effects and heavily reverb affected lead guitar lines.

The band's sound has most notoriously been described as a cross between Neurosis and The Smiths but they've always had a more Interpol vibe to me, from the icepick single note guitar to the detached croon of singer Joseph Martinez, albeit much heavier. They seem to be tuning their instruments the lowest they've ever been, and apart from the between song transition tracks, their's only a brief respite from the distortion at the start of final track Forgiving the Cleansing Meteor. This is as close the band come to matching the dynamics of Martyrdom... overall and there's nothing as quiet and beautiful as 'The Morning Eulogy' from the same album.

At just 4 'proper' tracks, the EP zips along nicely, and while it's not too far removed from the previous record, the songs here feel more finished rather than that records handful of ideas stretched but to fill a full length release. I'd still advise newcomers to start with The Martyrdom of a Catastrophist but this is a reassuring return to the bands previous quality and something of a relief.

Forums - Reviews and Articles - Junius - Days of the Fallen Sun