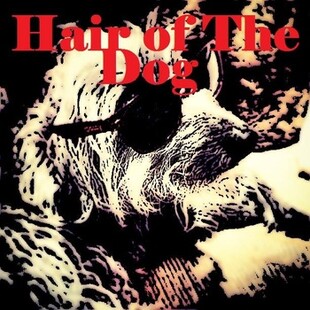 The band name conjured an ominous fear in me, a prejudice against a worry of cock rock pub stock masquerading under the misguided pretention of an edge gained through a stoner rock banner. The fact that they don't even label themselves as such in their press blurb as I re-read it highlighted my unjust prejudice. The comedy album cover as I clicked on the link didn't help assuage this though.

Hair of the Dog are a new three piece from Edinburgh and while their sound is submerged in classic 70's rock pointers, my fears prove unfounded. It is a gentle homage as opposed to foot stomp rock, the vocals nicely sung and minus any unfortunate histrionics. Led Zeppelin underpin the ethos of the band, and at times, such as the nifty rolly riff in 1000 Watts and elsewhere I'm reminded of the much missed London stoner mob Jecano, and songs from their never properly released, yet brilliant full length album.

The lack of fuzz keeps it from full blown stoner rock, but there are hints towards Graveyard at points, albeit lacking their nuance and beauty, save for the closing Ships in the Night, a very agreeable mellow bluesy number full of subtle and inspiring guitar work that could be a relative of Slow Motion Countdown from the Swedes' most recent record.

It is occasionally a bit too dad-rock, if not the more damning phrase of pub-rock, but on the whole it's a pleasant, enjoyable album, closing in on the indefatigable cool of the aforementioned Jecano and potentially pointing down a future path towards the simple, un-fuzzed pleasures of two other superb Swedish retroists, Dexter Jones' Circus Orchestra or Dead Man.