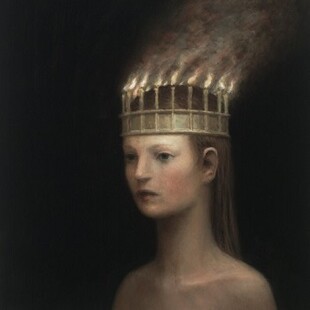 Mantar are a German two piece with a healthy lack of respect for genre purity. Death By Burning is a suffocating blaze of an album enkindled by death, black and doom metal crossover, kept alight by the methylated spirit of Motorhead punk.

Similar in their horizon-wide influence outlook to Norwegians Jagged Vision, albeit beating a more aggressive black metal heart, and the estimable Okkultokrati, Mantar deal in an exciting (for that is the only word for it as they meld and flit between type), ugly racket of noise. The fact that they're a two piece is only obvious in a couple of places, where you wonder why they don't build on the sound further, or play on a riff a tad too long, but everywhere else they're massive in a way only Black Cobra can top in the four legged stakes.

The variety is the obvious selling point here, but ultimately it would be nothing without quality and there are real glowing highlights abound - the desperation of the darkest track White Nights drips with black terror and venom, an atmosphere of murky fog to lose your mind in. The Stoning contains a positively groove laden riff, imagine The Dwarves with Lemmy on vocals - the fact that these two tracks can sit next to each other and yet not jar is an acclamation of Mantar's skill. The opening Spit meanwhile solders it all together nicely. There is a stench of a crusty Entombed, or latter day Darkthrone in the waters.

Always interesting - there are some lulls in attention, but even then you're glued to it, like one of those tedious shows that countdown "50 best something or other" you're hooked to see what comes next. Odd tracks are jack of all, master of none, yet Mantar prevail through a sheer persistent alchemistic fervour that makes Death By Burning near essential, especially in its pinnacle moments.