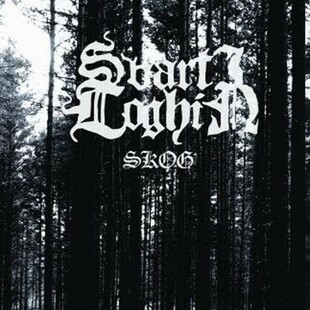 I'm not sure at what point you're allowed to push your stated influences when pitching new releases. "This is not Metal, but is Metal, this is dark but it is bright … this one is not to describe. Johnny Cash with the atmosphere of early Mayhem …" says the promotional email. Editor Mike was taken in enough by the blurb and album cover (black and white forest picture, obviously) to send it to me as a fan of black metal.

Sonically however, it's very far removed from black metal. The screeching, treble heavy guitar sound is ditched in favour of a thick, warm acoustic guitar backed up with sustained organ notes and artificial strings. If you were thinking it could be an acoustic interpretation of the traditional black metal sound, it isn't. It mostly sticks to finger picked open chords and very few of the atonal chord voicings and moves between classical and folk sounds, at least until fifth track Drivor which brings to mind a more traditional black metal atmosphere and structure, if not the actual sound itself.

Vocally, it's about evenly split between pre-recorded samples and singing. If the Johnny Cash comparison brought to mind certain qualities then again, these aren't met. The singing is more of an almost Layne Staley type upper mid-range croon than Cash's bassy, almost spoken delivery.

You might be the world's biggest black metal fan, you can copy the artwork style, namecheck Mayhem and give your download a suitable evil unlock password (obviously I can't say what it was, but it may as well have been "BeelzeSatan") but you have to expect some raised eyebrows when you're dropping quietly sweeping acoustic tracks with not so much as a raspy scream or a blast beat in sight. So it's dashed expectations all round, although there's no bass at all I can hear so it's accurate to the genre in that respect.

But more importantly, is it any good? Well, yes actually. Once you get past the fact that no, this nice quiet piece isn't the intro the some kind of sonic apocalypse the record's good points emerge. Tonally, it carves out a relaxing and distinctive sound, although it could do more to go beyond this. It's like the folkier aspects of black metal separated out and developed, but that's the entire scope of the record and it's a little too limited for my taste.