Eat Your Robot That Winning Smile of Dinner 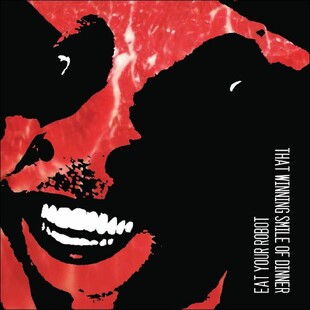 This is genreless stuff, it really is. Part alt-rock, with hints of stoner rock in there too, their blurb describes it as 'broken art-rock' which while not a genre officially recognised by anyone outside of the band, you have to commend Eat Your Robot for creating something truly unique.

Featuring members of London bands Thumpermonkey and Godzilla Black, they play a style that will irritate some and draw others in. With the guitars set to 'free-floating' it's not an easy groove to latch on to for the most part but if you do, you may well find something of a head-nodder here. Created using 'immersion composition' the band state that this method results in 'wonky music' and 'funny high notes' that's certainly in evidence.

EYR's vocalist veers between high-ended vibrato and an evil-sounding mid range that is unrelenting. Lyrics are pretty obtuse, but come in such volumes you will be able to garner meaning as they twist and turn from the speakers. The appeal here is the constant shifting of tone and riffs that creep across songs in stuttering, rickety fashions. There's a hint here back to late 90s nu-metal, but that's no insult, the unhinged circus-freak element recalls some of the more creative ends of that much-maligned genre, think Dog Fashion Disco crossed with Mevlins and you might be close to some sort of recognisable whole.

What I'm struggling to say is that EYR are by no means an easy listen, but have much to offer those who can persist with some patience. The attention deficit of their scuttling, creeping riffology has to be heard to be understood but as the band will probably attest, you'll either love it or hate it.

A truly Marmite release, but one worth hearing.