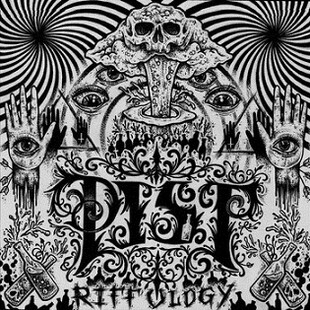 Pist arrive out of the blue with a fair bit of fanfare and momentum, despite this being their debut EP. Impressing the excellent When Planets Collide promoters enough to have them release this on their new-ish label, the CD version sold out on pre-orders alone.

Having not had the pleasure of seeing them live, it feels good to put a sound to all that is being spoken about them. The music takes a sprightly paced stoner/doom rock template on the whole, adding in occasional moments of sludge riffage (Gutter Slut, for example, highlights this in good style) and southern metal cocksuredness. It really does have a self-assured bluster about it, if the title of the record didn't give it away already. It's a good thing, but there are catches - the riffs don't stand out as I'd hoped of a record named Riffology, and there's a slight hint at a possible Pantera influence, which is always a worry for me in music like this. It never commits fully to it, to be fair, maintaining it's rock edge, but there is a general issue with originality across the five tracks.

Pist are like the new boy who arrives in school mid term in leather jacket and shades on their first day, with instant bravado, whom all the girls coo over immediately. And the boys in class either fall for him equally and follow round the playground, or sulkily wonder what the fuss is about. There'll be many who love Riffology - striking a pleasing mix of stoner rock, metal and sludge - so I'd urge you to check this out for yourselves. I however am not convinced, but believe they have a solid base here to work from which can be built upon toward potential greater output in the future.