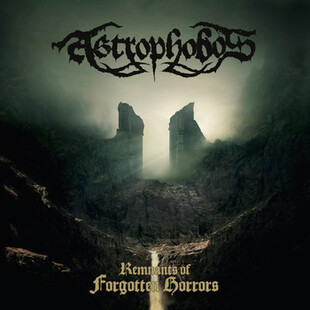 It's Sunday morning, the sky outside is a horrible slate grey, I'm freezing and it's been pissing it down non-stop after some apocalyptic weather yesterday. Time for some black metal!

Hailing from Sweden and named after a HP Lovecraft poem (always a good start for me), Astrophobos play a style of black metal that should be familiar to anyone who listened to a lot of the genre back in the early 90's.

Remnants... wisely ditches a couple of the more trying aspects of the older records. While sections are repetitive and sprawling, largely led by a tremolo picked guitar melody and raspy vocals, they're not dragged out for too long or played too many times. Indeed, only a couple of tracks go past the 8-minute mark and the whole album moves at a good, brisk pace.

It is however a record that's largely limited to two speeds, full on blast and a very slightly slower speed with an almost half time feel, and very little else. The sprawling 9 and a half minute Celestial Calamity features a middle section acoustic and drum breakdown which provides a welcome break from the unrelenting speed, but this is the final track and the rest of the album sticks to a very specific feel throughout.

The lack of variety holds them back somewhat, especially considering all the different branching paths black metal has taken over the past 20 or so years, but for anyone who's exhausted the purer sounding existing records from that era and wants more, this is a particularly good addition to the catalogue.