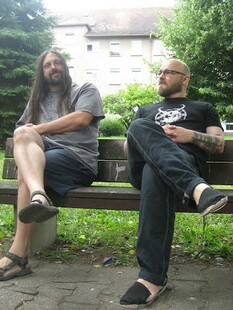 When Beehoover's second album, The Sun Behind the Dustbin, arrived at ninehertz hq seven years ago, little did we know what awaited us - from a seemingly limited set up of bass and drums, from an unheard of German band with an awkward sound, flowered possibly our favourite discoveries of all the music that has passed our paths through running this site. Boldly different, startlingly infectious and surprisingly heavy, it is noticeable that when people get into Beehoover, they get hooked and shout their love for Claus and Ingmar to anyone who will listen.

With a UK tour booked for March, following on from the release of their fifth album The Devil and His Footmen last year, we got in touch with the duo to ask them about how and if they've changed, the new album and what can be expected in March.

9hz: Thanks for agreeing to do the interview.

It's Claus here as I've pulled the shortest straw in the game of sharing band business. But I'm looking forward to doing this, so here we go…

We've been enjoying The Devil and His Footmen - how has it been received?

Glad you like it. The reactions have been a bit mixed but good overall. What puzzled us a bit is that some expected this album to be more surprising. Perhaps the fact we are a two piece has worn off and they want us to be something super special that we just aren't. We've never shown off in any way and we don't intend to do that in the future. It's about the music and that's it. 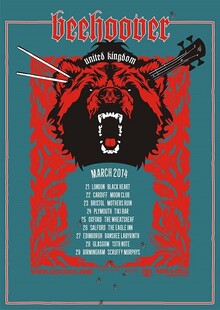 Would you say your sound has evolved over the course of your five albums, and if so, how?

We've always striven for homogenic, interesting songs that combine different stages of dynamics in a cool way. We also want to make albums instead of a collection of songs. We think this is our best attempt concerning this matter so far. Soundwise we're still happy. We had an idea of how we wanted it to sound before and it came out that way.

How much can you change and develop with only two instruments?

The number of instruments doesn't have anything to do with limitations. Singers / Songwriters with only an acoustic guitar would never be asked that question. In the end it's not the arrow, it's the Indian. Or to answer a bit more specific: we don't feel we've run out of ideas for another couple of years.

What is it like being in a two piece? Do you finish each other's sentences? Do you each have annoying habits that get on the other's nerves?

Being a two piece is great. We both have similar approaches when it comes to songwriting, often we don't have to talk to know what the other means. Technically it's great, we can travel in a van and co-ordinating the musical activities with our family lives is easier. Sure we both have annoying habits but we've known each other for quite a while now and know how to get along and not get pissed off by such kindergarten stuff.

You seem to have a good working relationship with Exile on Mainstream, is that correct?

That is correct, sir. We are lucky to have the support of a label that respects us as artists and lets us make the album we want.

How would you describe the typical Beehoover fan?

He or she's probably interested in a wide variety of music and a nice person to hang out with. 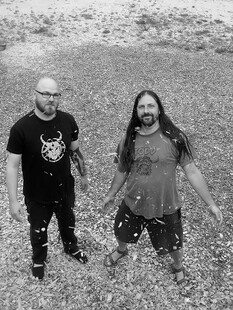 You defy genre boundaries - where do you find you fit in most, in your opinion and that of reviews and gig line ups? Is it different in different parts of the world?

Somehow we're mostly located somewhere between Stoner and Doom Rock, having played with bands like The Hidden Hand or Sons of Otis. When asked for a style we usually answer we play rock music. We have no idea of genres really due to adequate musical knowledge and anyway we can't really control our outcome. Perhaps this sounds a bit precocious but that's what happens if you just play what you want to play without pushing yourself into any direction.

Did you enjoy your previous visits to the UK?

Yes. I've lived in the UK for quite a while and it's always nice to be there. The gigs have been good, the people have been nice. We're really looking forward to our UK tour big time.

What can we expect from your tour in March?

We'll put on the best show we can, we're really excited about all this.

There are some excellent UK doom supports lined up for your gigs - who, or what are you looking forward to when over here?

Yes, the whole tour looks excellent really. Again, we can't tell you how much we're looking forward to it. Other bands, getting to know people, the beer, your basins without mixer taps, sausages for breakfast...you name it. Come to the gigs, have a good time and a chat with us afterwards, we'd really appreciate that.

What does the future hold for Beehoover?

More albums, more touring. We’ve got some interesting stuff but you'll get to know about this early enough.