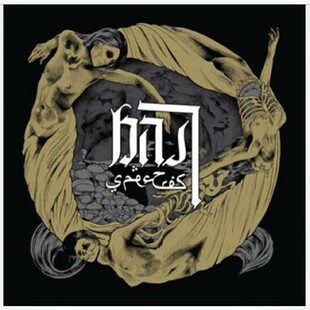 This release arrived unassuming in a jiffy bag the other day and got added to a pile. I returned to said pile a few days later and all the other CDs were floppy, like they had been melted by an unseen hand. The Bast one was ok though, so I placed it, gingerly, into my car stereo.

A typically grey Monday morning commute through clouds and rain was elevated into an epic journey I didn't want to end. Crows rose up from farmland as if they knew what was rattling away within my cold metal vehicle that morning, but they couldn't have known could they?

If they did, then surely this is the music crows are meant to listen to, it's dark, blackened doom of the highest order and could well be the best album we've heard within the genre for a long while. Much has been made of this new wave of doom bands, and for the first time, it's clicked for me. How to make Electric Wizard sound less than humongous? Put this Chris Fielding-produced effort on and prepare for your jaw to drop.

Recorded in Conan's new Skyhammer Studios, Bast have dropped these five tracks like lead weights and it's a pleasure to be squished beneath them. You have the bleak and hopeless emptiness of fast, harsh and wind-swept black metal on one hand and regal, churning doom on the other. It's all however kept on an even keel, the doom sections plough, paced quickly, forward through your temples and even the less tone-heavy sections like the atmospheric break in Denizens it never feels as if it is standing still.

The production again, if this is the first, or at least one of the early releases to emerge from this new studio, you can expect the future of the genre to have its base there. This is truly stomach-churning and sounds huge. The power is not even lost during the choppier and more Norwegian sections either, a fucking triumph.

The title track even has the ghost of Iommi and Lynott underneath the cold, desolate fuzz too. They are skulking at the back in black cowls while this three-piece (how do they make this noise?) blast away, rolling in the classic metal influences alongside a sound that is their own and rolls on like a black cloud enveloping everything in sight.

The press release compares them to some obvious, like-minded bands that play similar, cortex-damaging chords and clatterings, but I think where Bast stand out is they don't allow themselves to be distracted. Theirs is a singular vision that rarely explores unnecessary avenues. Five tracks, no need for filler. Bosh.

They are playing all over the UK with Conan during March. For fuck's sake go and see them.

300 LPs are being released on February 24th on Jon Davis' (Conan) label Black Bow Records, the CD and online versions on Roadburn's label Burning World Records. Purchase, you have been instructed.