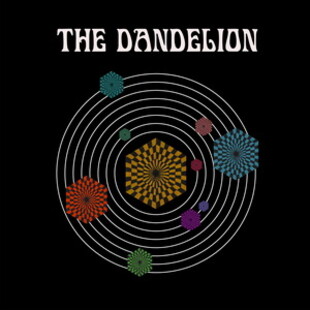 Released on the Danish label Bad Afro, home of Baby Woodrose, lends this release an instant air of cool, claiming of your attention more than natural for a solo offshoot from a band you've never encountered before. The Dandelion is one man, Daniel Poulter, frontman of Australian band The Dolly Rocker Movement.

The vibe is typical of the Bad Afro roster, trippy psychedelic rock. It is instantly and unignorably in the mould of Wooden Shjips - the whole six track EP could be the out-takes of the recent Back to Land album sessions, or more to the point - it just plain could be that album. The music, from both bands, washes over you like a sea breeze, occasionally not even registering, especially where one song starts and another ends, but brightening your mood and calming your stresses never the less.

Apparently all the instruments have been played by Poulter here, which is impressive just by the number of different sounds in the mix. It will take the recruitment of 5 or 6 musicians to play this live, which apparently is his aim. The obligatory organ is adjoined to all manner of wood-windery, occasionally reminding me of Crumbling Ghost in the intro to a couple of tracks, definitely harking to a folk membrane.

I swear Pleiadian Love Vibration is Iggy Pop (I Wanna Be Your Dog perhaps) played at the wrong speed - the reduced tempo robbing it of the punk vitality and replacing it with a 60's San Franciscan happy trip. The closing Leaving It Behind Blues and the sparkling All Seeing Eye Syndrome have Spanish style guitar running through them to back Poulter's pleasant vocal approach.

I could only hear the Wooden Shjips comparison on my first run through (the fifth track is perhaps knowingly entitled Borderline Originality Disorder), and with their latest only fresh from release it was to the detriment of this EP. But quickly, repeat listens re-energise the soul. Anyone illuminated by Back to Land and folky psychedelia in general should park their van here - this 12" is on oddly mellow yet stimulating and rewarding experience.