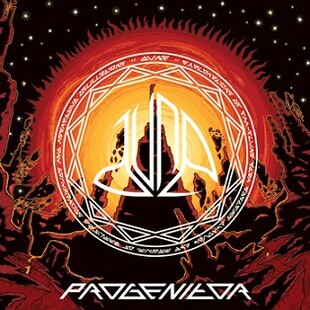 Influential hardcore protaganists Shai Hulud and Fear Factory's Fear is the Mindkiller EP are just two monikers that are recognisable as you read through the science fiction masterpiece Dune as influences upon metal (and no doubt many a prog concept song or album).

While not on a par with the list of black metal band names borne from the pages of the Lord of the Rings, it obviously captures the imagination and sparks the creative musical juices. As it happens I'm reading the book for the first time right now, and when I saw a band link on the ninehertz facebook feed to a site labelled 'songs of Arrakis' (the true name of the planet Dune), I followed.

I'm glad to say I'm in debt to the coincidence as it took me to Progenitor, a precocious and enthralling album, a molten stew of modern metal influence and power. High on Fire metal savagery gives way to hints of Kylesa, with Melvins type copious riffage to follow, ending in Red Fang's ear for bombastic tuneful finishes. And that's just the first song proper, the superb Protostar, preposterously packed with high quality passages and riffs.

Dune, from Edinburgh, take on Mastodon's progressive weightiness and throw in sludge and doom markers that harness against any descent into prog wilderness. Mellow instrumental interlude tracks, guitar noodling, stoner rock specks, trippy segments, fast riff openings - it is an explosion of variety and input, while never sounding messy, contrived or too in debt to it's influences.

As clever as the most prescient Bene Gesserit, as heavy as the Baron Harkonnen, as menacing as the Sardaukar, all while tripping on the spice, Dune have created a land shaping colossus of an album.