Bowl of Dust & Co. Fox With Horns and Antlers 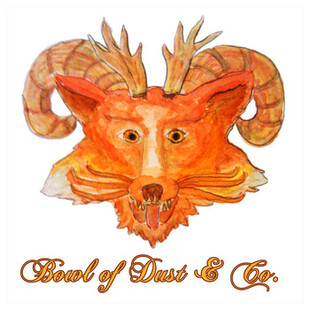 If you're familiar with the show Portlandia, there's a sketch when they have to write a 'Song for Portland. They keep sending snatches of ideas for songs to each other and each one sounds more ridiculous than the last.

That's not to say that Bowl of Dust & Co. is ridiculous, just incredibly adventurous in a skewed and overenthusiastic way. Tinged with more than a hint of hipster vibes, some of this release sounds as though it was recorded on a dictaphone in a bathroom, others by a campfire. It gives it a unique and captivating sound as a result.

The vocals are what keep your attention, twisted and quirky and with a playful sense of wonder in evidence it certainly takes you to warmer climes. The touch of Devendra Banhart is here in spades and you can imagine shows are played in apartments, small bars and sun-baked festivals.

The man behind the music here is Dandelion Lakewood, who also collaborates with The Humminbird, who we also reviewed recently. She (Muyassar Kurdi) appears on a few tracks here, most notably Backrub Improv which comes across as halfway between what the title implies and an African throat singing session. It's the constantly shifting ideas that maintain your attention, even if some of those ideas are taken to extreme and therefore comical ends.

Fun and peace is what you get from this, indeed the marshes seem to be calling you on Children of Avraham which evokes memories of watching Sunburned Hand Of The Man improvising their way into some mystic trance in a basement in Sheffield. There's a similar level of inventiveness here to that collective and I'm sure it's entered their psyches before.

The drum circle-esque Tree Stump also evokes a spiritual sound that sounds otherworldly and slightly unhinged. If you want to lose yourself in sound for a while, this is certainly a record to spin.

Forums - Reviews and Articles - Bowl of Dust & Co. - Fox With Horns and Antlers