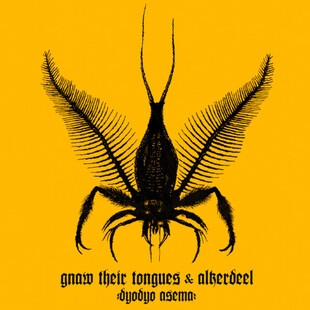 If anything is likely to drive you back into yourself on the arrival of a new year and an optimistic mindset, this is the record to do it.

If you were thinking to yourself that you might take up gardening and perhaps try and eat a little healthier, this single, 19-minute shutter of bleakness will have you leaving the back yard to overgrow and consume that new mountain bike while you gorge on Christmas leftovers, abandoning shame, new diets and your hope.

A melding of two already dark and bleached acts, Alkerdeel are a Belgian black metal band famous for their gloomy disposition and Gnaw Their Tongues is the Dutch purveyor of one of the grimmest sounds committed to tape in recent years, his (Maurice De Jong's) past work including An Epiphanic Vomiting Of Blood have sent reviewers running for the hills.

What we have here is almost too much to bear, there's multiple layers of razor-sharp and trad-sounding black metal at the heart of it. This is overlaid with a musk that is electronic and static-like. Combine this with the pained and frustration-filled vocals and you have a deeply affecting sound that brings to mind the heavier sections of besuited death/black metl Brits Ackercocke and the more relentless elements of the early Norwegian sound.

With several vocalists contributing during the course of the release, we are treated to death-like grunting, glass-shattering screams from blackened pits and sinister spoken word sections lost under the haze of guitar and bracing percussion.

As it wears on, you are drawn into its ever-closing trap, there's euphoric chord progressions hidden here and there that make your hair stand up on end but for the most part you'll feel on the cusp of shutting it off. Kind of like a car crash, you can't help peering in, even if every sinew in your body screams 'look away'.

This track is a fitting tribute to Consouling Sounds, which marks five years since the label's inception. With an impressive roster including Aidan Baker, Amenra and Year of No Light. Here's to the next five bleak years.

Listen to the album here.