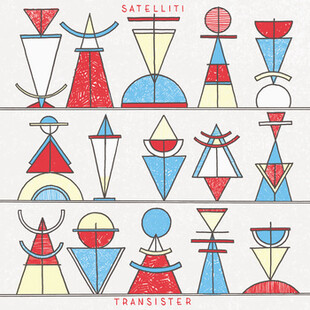 JAZZ. For anyone not already scared off, read on.

Actually, I'm doing Satelliti a disservice by summing them up in a 4 letter word that's more offensive than most to some people, as what they play has it's roots sunk deep into jazz, there's a lot more going on. Most obviously, in the heavy use of electronic instruments.

There's little in the way of acoustic instruments at all on the album, to the extent that I suspect even the traditional drum sounds are actually samples. So where traditional jazz brings to mind groups of sharply dressed heroin addicts playing endless solos on unamplified instruments, Satelliti are more likely to make you think of bearded guys sat in front of old analogue synths and sequencers in a cold room in mainland Europe somewhere. They in fact list Krautrock as an influence and the album cover is suitably Bauhaus inspired. More Can than Coltrane.

Pieces are typically composed around short, repeating synth bass patterns which cycle steadily while the drums and various electronic sounds improvise rhythmic figures and drones over the top. Full on jazz freakouts are nil and while each piece is thoroughly explored by the different instruments, it's all kept pleasingly grounded, although I would have liked to see it get a little ruder in places. Nitpicks are those inherent to the genre.

While it's tempting to keep the spirit and ethos of jazz improvisation while ditching the simpler aspects of it, not starting or ending with a lead melody means some of tracks merge one into the other. This is offset by the occasional stylistic break, such as the slower Little Princess but a few of the earlier tracks can pass by if you're not giving it your full attention.

So, very much a niche record and one I can't see many 9hz readers getting their teeth into unless they have a fondness for European tinged electro jazz. It seems like such a Marmite idea that anyone still reading probably has the Bandcamp page open already, whereas everyone else has shut their browser down and set fire to their computers. I personally thought it was great but who really listens to what I say about this sort of thing?