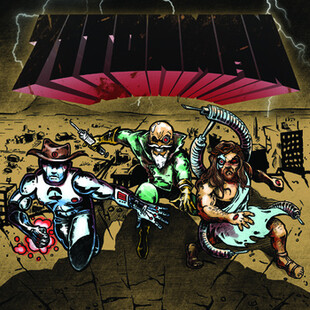 The festive period has taken an interesting twist. Having stuffed myself with roasted meat, vegetables, chocolate and sugared treats I seem to have drifted into a food coma. I seem to have awakened on an inhospitable planet, the prevailing atmosphere seems to be overly warm and the conditions bleak and muddy.

The only person I have met so far is a mad, shuffling beast of a man calling himself Dr Psycho, he screams portentous phrases at me and frankly I'm alarmed by his every move.

He is constructing something he is calling a Bacon Bomb and is making me watch endless tests in featureless fields. The sound it creates is one of rolling despair and what I imagine humanity to sound like when it realises its doom is certain.

He has plans to introduce me to someone he keeps referring to as Cyborg Jesus. I'm not sure if this person is real or is a hallucination from Christmas, but he seems to get more excited when talking of him. He has played me a recording of this person talking and it sounds like a sludged-up Dave Lee Roth on a comedown.

Dr Psycho not only has dreams of annihilating his enemies with a Bacon Bomb, but also has a whole workshop full of sinister devices. There's rudimentary weaponry of course and a whole section devoted to sound terrorism, but the less said about his Face Fuckin' Machine it appears, the better. He started explaining something about its mechanics, but I managed to divert his attention by asking about his knowlege of 90s bands like Iron Monkey and doom stuff like Sloth. It appears that Andy's Records and Our Price were in existence here well into the 2000s and he was able to get a pretty sick CD collection going before the advent of downloads and the vinyl revival.

The only thing he seems to fear is the 71 Ton Man, apparently the name is self explanatory and he apparently comes from Europe, but that's all the information I can prise from him at the moment. He seems to go rigid with fear whenever the name is mentioned. I have no idea if it's a giant and record-breaking fat guy he is scared of, or a towering robot that happens to weigh a lot. All I can glean is that the 71 Ton Man is someone to fear and respect.

I hope I can make it back to my own world by 2014, but for now, if my message is received, please tell my family and cat I miss them,