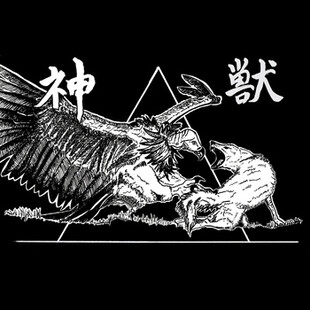 Members of Moloch and Dead in the Woods playing Catharsis-inspired hardcore? Do I really need to say any more? Ok then, I will.

Vocals: Screeched and I'm guessing are Jeremie from Dead in the Woods, he has that raw, horrible throat-scratching thing going on. Like a dog trapped in a bag, panicking.

Guitars: There's some dual stuff going on here and the tone is 90s 90s 90s, like, Ed the Duck fucking 90s. If you need reference points, think of the mid-paced tone that Napalm Death used to flaunt, but with a rougher edge.

Drums: Erm, someone here has mad skills, I never say mad skills but blimey charlie this guy is pummelling the horseshit out of these here.

Lyrics: Suitably bleak and horror-filled. Who can resist lines like This plays against a dark Background/All painted black – hopeless/ No hope left – blackness/ Abandon all hope. Give up, give up.

It's like the void is not only staring back at you, but is clawing a piece of your flesh off, talons working their way down to the bone for the most meat they can rip off. Truly harsh.

Delivery: On cassette for the full effect I reckon, but you can stream it via bandcamp below. You'll also no doubt be able to catch them at Stuck On A Name in Notts soon enough.