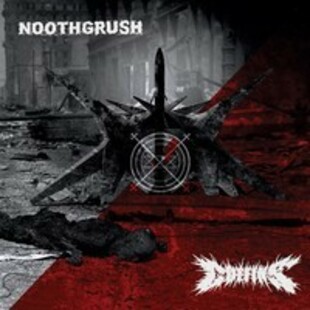 It's great that Noothgrush are back together, and have been since 2011. However what's even better is that Dino Somesse who used to do his barking for Dystopia in the 90s within their ranks now.

This split LP with Japan's Coffins is a long-awaited and potentially mind-melting release then. Thankfully it's as gristly and unappetising as you'd expect. With a guitar tone that would send shivers up Eyehategod's collective spines, the style is 90s sludge and plenty of it. We're talking long, grimy notes with drums cracking away as if at a rock face. The vocals aren't as creepy as they were in Dystopia, nothing could be really, but are certainly full of leaden intent and painful slurs that hit the spot.

Noothgrush's second track of three, Jundland Waste comes complete with a hobbled groove that the current pretenders to sludge's crown are attempting to replicate without any conviction.

It goes from hobbling to drug-addled from here, with closing track from the 'grush Thoth being smeared with a sample of a stoner/space cadet gibbering about voices from the void and psychedelic spheres. The track itself is waking in me several clichéd rock journalism phrases, 'as thick as molasses' and 'heavier than a ten ton brontosaurus' coming to mind, but you get the idea. Heavy, mate.

Coffins are a band I've not given enough time to before, so thankfully they are here on this split to show just how unpleasant they can be.

With an altogether more clattering, death-like manner that the loose and sloppy Noothgrush, they almost sound like a death metal band dipped in thick tar. Their drummer seems to be on his own mission, smashing away at cymbals as if they were animals come to attack him. The juddering and forceful bass and guitar tone below all this is backed up by some deep, guttural grunting and gives it an air of menace.

Final track The Wretched Path actually takes on more of a black n' roll sound, where Coffins find their inner Motorhead. It's a bit like the black metal via Detroit of bands like Vried, so if you like a bit of headbanging with your deathy vocals, these could be right up your street.

I could do without the artwork though, this demands something less airbrushed and more potato print, more brutally minimal. Otherwise, i's a thoroughly blackened rocket of a record.