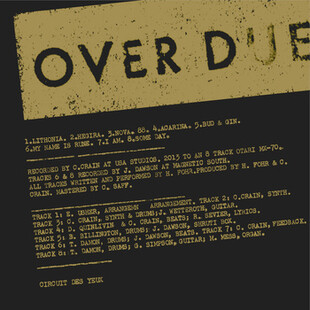 This fascinating and baffling LP from Haley Fohr recording for the fifth time around as ‘Circuit Des Yeux’ sounds like the elated feeling when reality slides back into the frame after a six hour mushroom trip is exhaled- a trip that has been soundtracked by a post-apocalyptic PJ Harvey.

There is quite a broad spectrum of song writing and transient soundscapes happening on this record, but it retains a coherent whole, it all feels cold and grungy whether it’s at the more singer songwriter end, the lo-fi Americana, of I dunno, Akron/Family or playful experimentalism.

Overdue reminds me a bit of the range and depth of Jim O’Rourke’s Eureka and how avant garde pop songs can be bent and blended into weirder and sometimes alarming forms whilst retaining a distinct, unmistakeable artistry.

This record is bookended by two really great songs Lithonia and Some Day and between, as a listener it’s really satisfying to be drawn into this compelling world. If you’ve previously had any truck with all this chat about whether the format of an album is an anachronism, listen to this- and wind your neck in.