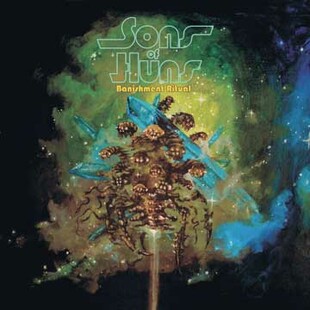 The terribly named Sons of Huns hail from Portland, Oregon, a place I know to be considered too cool for school, in a potentially annoying way, but for reasons unknown to me - probably because I'm not cool in any way. This album, released on Easy Rider records, is the first I've heard of them and even if it didn't mention them by name in the press release as it does, you quickly get a sense of a fondness for their city mates Red Fang. With their Whales and Leeches album released on Relapse this past week, it seems bad timing to put out an homage to their good time riffage. Although Shaun of the Dead benefitted from the coincidental exposure when released at the same time as the Dawn of the Dead remake, so who knows?

As well as going off track, I have been a tad unfair; it's not that blatant a mimic. Banishment Ritual definitely gets better with repeated listens and throws up a few other influence pointers along the way. As well as the party stoner vibes, there's some rock n roll swagger and the odd surprise doom change of pace amongst the albums eleven tracks. The eponymous opener harks to the much missed Scissorfight, even to the vocals, although slighlty less idiosyncratic as the mighty Iron Lung, where as Lord of Illusion quickly gulps down the downers into Sleep's Holy Mountain worship.

Elsewhere there's some highlights in terms of head nod inducing riffs (on Heliolith and Horror in Clay in particular) and some duffers - I'm Your Dad falls well on the wrong side of naff, coming off like a metal Rocky Horror soundtrack cover, a definite bad thing before you get any ideas.

Play Banishment Ritual at high volume for maximum impact, and like I say, give it a few goes before dimissing it and you find something quite enjoyable. It doesn't quite unearth an x factor to make it essential, but the slight cheekiness and sense of fun - like Bad Wizard beefed up with a healthy dose of the heavier elements of Clutch - stop this becoming mere glorified pub rock. Well worth investigating for those not satiated by the new Red Fang fix.