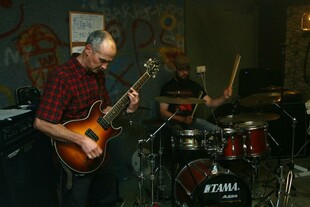 Sixteen Hooves are one of Sheffield's most arresting bands and one that need to be caught live. We catch up with Lee (drums) and Nick (guitar) to see what is happening in their Beefheart via Melvins world these days.

9hz: First things first, when did you form?

Nick: We think it was around 2005 or 2006. We'd seen each other playing in other bands previous to that so we knew what both of us were into and stuff.

Lee: I think we got chatting over Beefheart and we both wanted to do something a bit spikier than we were at the time (Ed: Lee is in various bands: Drought On Titan and Drawn From Ichor, Nick is part of Dog Canute).

Nick: We both like a diverse range of things so we bring different things into it.

Lee: I think we started like that, jamming on riffs that were a bit twangy. It was almost like a stripped-down Dog Canute.

Nick: I like spiky and odd time signatures and Lee's drumming goes well with that. We have quite a few improvised sections within the songs too so it helps we're on the same radar.

As we've done more songs, there's probably parts we can redo and bring back for new ones now. There's bits of rockabilly and shuffle in there as well as doomy bits that sound like Melvins or The Jesus Lizard. It goes back as far as Gang of Four and The Birthday Party too.

Lee: I'd say we've got an open sound that's also tight. We can read each other well. It's making it chaotic but being able to bring it back from the brink, that's what I enjoy.

9hz: Has being a two-piece held you back at all?

Nick: Not in some respects, being just the two of us means that if we get asked to play a show on a Friday on a Monday afternoon we can give a really quick answer!

Lee: In all the time we've been a band we've only played Sheffield and I think London once.

Nick: It's sometimes quite good, we've played some shows with some really diverse bands and always gone down well. We can appeal to a big range of people. We had an amazing show outside a pub in Woodseats once as part of a festival weekend next to a bouncy castle, people have come up to us since elsewhere and said they enjoyed that haha!

Recording wise, we sound like we do live so there's no overdubs unless they are one-offs so that's easy too. We have a new batch of songs that could be recorded soon actually.

Lee: What's weird is that people still need a frontman or a full band sometimes, which is frustrating for us. We're better than them! Busking is an idea we've thought of too.

Nick: I've just got an amp that really suits that so we might end up doing some guerilla gigs, you never know! That might be a good way to gauge reaction locally, the go elsewhere with it?

9hz: You should do what that band Friends Forever used to do, use a transit van with the kit inside and just open up the sliding door and start playing outside other people's gigs!

Anyway, do you see yourselves taking more gigs outside of Sheffield?

Nick: The touch rate of promoters is a little ropey. There's loads of people we've helped out but getting it to be reciprocal can be a problem. I think we'd go down really well in Leeds for example.

Lee See a lot of promoters I get in touch with are people who are in a certain mindset of only putting metal on or whatever. We haven't really got a specific tagline and sometimes people need that.

Nick: We've called ourselves 'bi-polar blues' and 'experimental riffage' in the past which might be why. 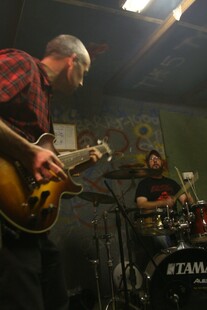 9hz: Do your other bands ever have an influence on Sixteen Hooves?

Nick: When we come up with riffs, I'll think, 'that's a Sixteen Hooves song' or 'that's a Dog Canute riff' but often we just jam at practice.

Lee: As far as my playing goes, I do the same as I do in my other bands. I always try and play off what people are playing to me rather than following a beat.

Nick: That, and songs tend to vary when we play them anyway.

9hz: How much of your songs are improv?

Lee: I'd say 30-40%, but it also depends on where we feel like finishing. There are some anchor points, like there will be a snare roll here or a descending sequence of notes there that will signal it's time to start or stop.

Nick: We used to do a reggae/raga thing where we'd use ridims, there's three kinds where you mix the reggae styles up. Because we both listen to diverse stuff we can bring in these influences and sounds like we have had almost samba-style riffs at points before.

We've recently done a show with a blues guy from Bradford called Ben Bluewaters, a few Beefheart and Howling Wolf songs. He's an acoustic blues guitarist, he did vocals too.

9hz: What can people expect from your set at homeMADE given that it'll be an hour?

Nick: Well I'll be standing up! I should probably explain. I was rock climbing last year and a boulder fell on my back from a cliff. I'm lucky to be alive really as it could have easily hit me on the head. I've been recovering slowly and I'm back to hill walking but not as far as I used to go. Lee has to carry everything now which I suppose is an advantage.

When I was laid up at home, I had time to finish about six albums' worth of music I had left to finish off. I've been walking again since though...

Lee: Tell him about that seal!

Nick: Oh yeah, I found these caves on a recent walk and heard this weird noise, went to the back of the cave and this seal was there looking embarrassed that I'd walked in on him singing on his own! Maybe we should get him to join, Sixteen Hooves and two flippers!

Sixteen Hooves play at homeMADE on Saturday 30th November at the Audacious Artspace.