The Humminbird Beyond The Orchard 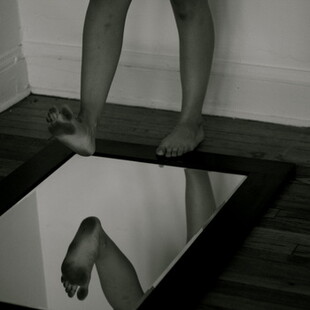 Humminbird is just one person, the ghostly-sounding Muyassar Kurdi.

Recorded in Chicago, Beyond The Orchard feels like a drifting, skeletal husk of a record. With the sounds distant and vague, it has a detached and glassy-eyed feel with her lilting, soft vocals carrying away on the fronds of her auto harp.

Each of the first three tracks barely scrape three minutes and the reverb heavy, breath-like hum of the harp gives it an other-wordly feel. This is a Sunday afternoon record or something to wake up to when a winter's day makes the sky white and pale.

Dear Momma starts with distant conversation before the auto harp cuts through this with its treble and fresh sense of attack. This feels more claustrophobic than before, but also evokes the past. This could easily have been found in a junk shop on some nameless, dusty 78 record, re-introduced through crackles and pops to a new generation of ears.

Her off-kilter singing style combined with the demented-sounding harp makes this a difficult listen at times. But cut through the strangeness and there's some enjoyment to be had. Found sounds even creep into Don't Want Your Love and the title track, sounding like a dripping roof of a cave, all echoes and trills.

This is one to persevere with and to listen to in context, but is by no means a failure, rather, of its own path.

Forums - Reviews and Articles - The Humminbird - Beyond The Orchard