It was a lovely warm night in October at The Riverside, Sheffield. I went to enjoy a pint with Sheffield psychedelic post-rockers Skyligers; Joe (bass), Steve (drums), Ian (guitar), Jono (guitar) and Steph (vocals).

Fresh from practice, they answer some burning questions we have for them ahead our next MADE event, Home MADE.

Ari: Now then. You guys have been several incarnations before settling with Skyligers. Tell me how you came to be.

Ari: How long were you all together with Slowmoves?

Jono: About a year, a year and a half?

Ian: No, it was nearly two years.

Jono: Yeah, it was a year and ten months.

Jono: We had six tracks!

Ian: We recorded an EP and everything!

Ari: Have you recycled any tracks, or did you start from afresh?

Ian: Nothing at all.

Jono: We abandoned everything we’d done before.

Steve: We haven’t taken any tracks and carried them on, but there were a couple of things me and Joe had that didn’t get developed, or didn’t get put into anything that we’ve reworked, and that have been and could be potential songs for Skyligers. 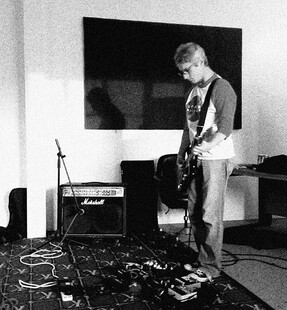 Ari: You even tried a singer for a bit, you’ve pretty much answered this question, with Steph showing up! Do you think you’ll expand again, or is this it?

Steph: Like The Polyphonic Spree? Get about 30 different members? We could do with ten more, maybe.

Steve: I think we’re alright. Steph plays guitar as well, so we might even have the option of a little bit of meaty back up.

Ian: We’ve got room to expand, but I’ve always found we wanted a singer because the previous bands had really quite fancy guitar work, and I don’t think I’m out of line by saying, neither Jono nor myself are particularly competent guitarists!

Ian: There was always space in the music for vocals.

Steve: We’d write sort of, well, this could be a verse, this section could be extended, so we’re at the process now of almost, reverse engineering our tracks. We’re treated what we had before more as fluid than concrete. We’ve written three new tracks with Steph so far, and we’ve only been with him for three weeks.

Ari: What’s your role in the band Steph?

Steph: I don’t know what they call it. When someone stands out front. People say “front man”. I hate that term. I’m a singer, so I guess that’s what they’ve got me here for. To, you know, sing in the band!

Ari: I’d say you’re somewhere between a hard mix of funk, psychedelia and aural post-rock. It’s very unique. What genre would you consider yourselves to be?

Ari: Joe brings the funk! I mean, where would you pigeon hole yourselves on the “genre scale”?

Steve: Hmmm, the genre scale. Well, before Steph joined we had the task of putting a couple of lines down to describe ourselves for Tramlines. We couldn’t think what to put. We ended up going for “Psychedelic Post Rock”.

Ian: I wanted to write, “Psychedelic noisesmiths” it would have sounded far more interesting.

Steph: I like that. “Can you bespoke me a certain frequency?”. “Why yes, of course we can, what would you like”. I’d agree with what Ian just said, yeah. 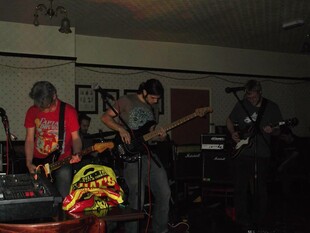 Ari: How did the sound develop, and who would you say your influences are?

Ian: Mogwai’s like a safe centre of the Venn Diagram.

Steph: I don’t know if it obvious to these guys, but they gave me a CD to listen to. So I could work on some vocals. I could hear Pink Floyd crossed with Jeff Buckley. This is what I Felt.

Ian: Two bands that I am utterly unfamiliar with!

Steve: If we all answered that question, there’d be a lot of different answers.

Ari: I share my birthday with MJK, fun fact!

Steph: Steve, you know Maynard’s wine gums? Does he own them?

Steve: No, but he does have his own vineyard!

Ari: What’s your song writing process like? Do you go in with a plan or is it more spontaneous?

Ian: Some of the tunes develop out of riffs we’ve jammed. Others are ri…

Steph: DON’T LIE! You all go into a ten-minute trance. I’ve seen it!

Ian: Well, yes, personally the tunes I write. I’ll draw circle in salt on my kitchen floor, burn some candles, incense and meditate until I reach a gnotistic state, and that point I pick the guitar, and it just flows. A complete song come comes from me, myself.

Steve: Truthfully, Jono or Ian will bring something they’ve been working on at home to a practice. We then jam different sections until we feel comfortable. Then start talking about a direction for the track. 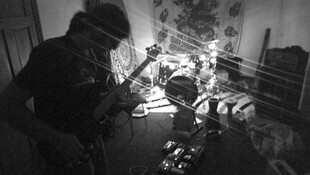 Ari: Is there someone who is the “main brain” or are you a collective brain?

Steve: If you look at each of the ideas, next to who instigated each track, I’d say Ian would have the majority. Just after that is Jono, then Joe.

Jono: Steve does bugger all!

Ari: You have your first recording available up on Soundcloud, how close are we to a full EP or album?

Jono: We were talking about doing it next year.

Joe: Before a year, I’d say within the next six months.

Ian: We could, if we knuckle down, have demo of all our tracks by February.

Steph: Easy, mine’s an armadillo. I like the fact that it looks right hard, but when it gets attacked, it rolls down a hill!

Ian: You’ve got to bear in mind, it’s a sky liger. It’s a winged beast.

Steve: That woman from Teeth.

Joe: Phoenix is a solid choice.

Ian: I’m going to go with the current trend. The Kraken.

Ari: I prepared a quick liger pop quiz, you’re allowed to confer on these ones!

Ian/Jono: It’s the first one.

Ari: Correct! Question two, What’s the name of the other tiger/lion hybrid?

Ian: Hmmm… well, there are a couple of references. I looked it up. Nobody was able to say definitively. There was ‘Tion’, ‘Tigon’, or ‘Tiglon’. I think it’s Tigon.

Ari: Tigon is correct. OK, which is bigger. A tigon or a liger?

Ian: That’s why we picked the liger!

Ari: Correct! True or false? The liger is the largest known cat in the world.

Ari: Maybe I asked the question a little strangely, largest known cats today. I’ll give you that one. You guys certainly know ligers. OK, If you had to listen to one song only for the rest of your life, which one would it be?

Ari: What about album?

Ian: ‘Let it Come Down’ – Spiritulized.

Ian: Lazer Guided Melodies is fantastic, but ‘Let it Come Down’ is so lush.

Steve: De-Loused in the Comatorium – The Mars Volta.

Ari: Sheffield has had its fair share of post rock bands retrospectively. Now it seems scene is almost blossoming again. How do you feel about the current state of post rock locally?

Joe: It doesn’t feel like there are enough of us in numbers, we were just talking about this.

Ian: I only know your band and ours.

Steve: I can name three.

Ari: What about going forward, do you think there’s still room for experimentation in this genre?

Ian: Without experimentation, the genre will die.

Joe: Whenever I’ve had conversation with people about post-rock, the phrase “post-rock by numbers” has come up. You can be guilty of doing the same formulaic build, build, build then it goes off.

Steve: Well, that’s what you get with a genre, that’s how you define it.

Jono: For example, I found at ArcTanGent after a couple of days of hearing the same noises. There were a few stand out bands that were incredible, but more often than not, when were wandering around, you’d hear a band and it’d just sound like another anonymous band.

Ian: From a personal perspective. What we try and do is make sure each one of our songs is different. So as long as we think that what we’re doing is new in some way, it doesn’t matter if it’s almost not to the rest of the genre, because what we’re doing kind of falls within that genre anyway.

Steve: The thing with every genre is that you listen to, say, jazz. People who don’t listen to jazz think that it all sounds the same. But, within jazz there are lots of different routes. Like at ArcTanGent, you had the screaming bands, the folky bands, and the post-rock by numbers. Post rock has a pretty broad spectrum.

Ari: You’ll have an extended set to play around with at Home MADE, what can we expect?

Ari: An hour, give or take.

Steph: If worst comes to worse, can I just say this. I’ve got a solo-album coming out soon.

Joe: Shameless self-plug! I think you can expect some instrumental tunes as well as the newer songs with vocals.

Steve: A lot of atmospheric stuff between the guitars. Tight rhythm section! You have a lot of harsh to loud. There are some tracks that are just balls out of the bath and other which are way more mellow.

Jono: I think Ian, it’d be a sad loss to one of our live shows if you didn’t break out one of your gags.

Ian: I’m giving this to the interview! I tried to make a belt out of watches, it was a waist of time.

Jono: I’m quite glad you used that one actually.

Ari: Yeah, on that note…

Skyligers play at homeMADE on Saturday 30th November at the Audacious Artspace, Sheffield.