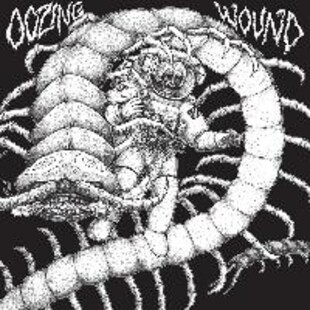 Oozing Wound are not revolutionary, nor are they terribly interesting. They also don’t sound like they’re supposed to be.

They are heavy as fuck, and I think that’s the point. I don’t particularly care for the high pitched yelling, but it gets the job done and burns an image of a mohawked Tom Araya into my brain.

That’s not a good thing, but it could be worse.

The first two tracks of Retrash are fairly monotonous, beyond the obvious appeal of being fist-pumpingly thrashy. Music for teenagers who just stole a case of PBR and want to party.

A groovy overdriven bassline grants me reprieve from the second track. This album must be a late bloomer! Remains heavy and dynamically uninteresting, but at least the riffs are strong now.

Still not an enormous fan of the vocalist, but his performance remains solid and passionate. Call Your Guy is definitely a highlight. The fade-out stays heavy enough to (I’m speculating now) impress Phil Anselmo. Can’t believe that track held my attention.

The album sounds too passionate to be multi-tracked, like these guys booked a studio for a few hours, played their songs in one take, and left. Loud, angry, and charmingly thoughtless. Nobody edited these songs, and any suggestions of writing a catchy bit or appealing to the casual listener were surely quashed in the first trimester of creativity.

The closer, Spirit Manimal, (has a funny name, and) was the only other track on Retrash to catch my attention. I think I want this band to be instrumental. According to the press release, The songs...use humor to defend against and explore the anger, paranoia, and destruction that characterize life in the modern era.

That’s an adorable story, but if it’s true, it doesn't shine through in the music. I’m sure they’re referring to the lyrics, which are unfortunately unintelligible.

In short, Oozing Wound’s Retrash gets a decent score if you’re drunk and partying with a bunch of punks, and a hell of a lot less than that if you’re just looking for something to casually enjoy. This music is meant to be lived, not listened to. Songs for the troublemaker pushing their way to the front row of every punk show in town, but not for many other people. I’d like to believe that this band wouldn't have it any other way.