Blood Red Water All the Ills of Mankind 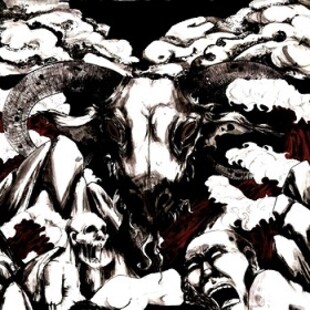 I have periods of listening to certain types of music - admittedly within a narrow sphere of stoner, sludge and doom, but I'll get into a new album and that'll spark off a month or so of listening to that and it's contemporaries in general. At the moment, following great releases by Crumbling Ghost and Blood Ceremony, I'm in a folk-proto-doom period. It'll change, sometime soon, but it's strange listening to other types of music when in a mood like this. The transition over can be weird - adjusting to differing genre song lengths is difficult, for example. With being asked to review All the Ills of Mankind, I've had to get my sludge head on.

It instantly sounds gruesome, the cymbals and grimy production give an appropriately unhealthy feel. This is definitely sludge, played with intent and aggression, but with the necessary (for me) groove to not swallow itself in its attempts to be purely blackened. With a nod to Weedeater allied to the grandiosity of Electric Wizard's more bombastic moments, it actually bears a likeness to bands from the current NWOBD&S (New Wave of British Doom & Sludge ©) - such as Atragon or Limb. Except Blood Red Water are from Italy.

Venice, to be more precise. I went to Venice, nearly two decades ago, and it is an awe inspiring place - beautiful architecture and an aura unlike anywhere else I've been. (Although admittedly I was 15 then, and on a football tour, so the highlight to me was catching sight of the Library building from Indiana Jones.) It's easy to forget it's a working, living, breathing city and not just a tourist curiosity and beyond the visual aesthetics, there is a sense of a darker side, the lost corners, the occasional foul stench of the canals, and of course the creepiness ingrained by the film Don't Look Now.

Presumably that's had an impact on BRW's musical outlook. Slightly comically, a biog on bandcamp reads "BRW musical influences list is long (EyeHateGod, Electric Wizard, Saint Vitus)", but exemplifies the band - a potent concoction of doom and sludge, passionately played and often engrossing. Proof further that sludge in 2013 has more to offer than any of us once thought, more than simple EHG aping. It may well have signalled the start of a sludge period for me too.