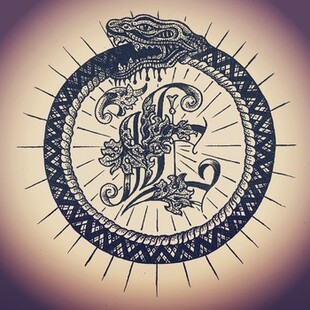 There are a fistful of bands in the UK who are straddling the line of dark hardcore, placing either foot into the foetid pools of various metallic elements, creating a claustrophobic and suffocating miasma of hate fuelled music. Exhaustion could quite happily be lumped into this category, however, I feel they stand very much head and shoulders above the putrid haze.

The opening seconds of the debut release had my mind reeling from a sledgehammer blow to the auditory system. Left grinning manically, I searched my consciousness to try and understand a little of the feelings that arose in me as a reaction to this record, what makes it appeal to me so much?

I think the key is this; Exhaustion are reaching back into a middle time that is not past enough to yet to have returned in the ever turning cycle of extreme music trends. They have dragged into their music, elements which should never have been excised from what I consider to be DIY music. A comment from a friend of mine almost, but not quite captured the essence, 'It's like all the best bits of Jane Doe.'

Exhaustion are not afraid of writing technically proficient music. This record is incredibly well played and constructed, taking heavy Blackened Death Metal influence and welding it seamlessly into the punishing relentless fast hardcore of this moment and then introducing Dillinger-esque sections that somehow step up the intensity another notch, without disrupting the flow of the music. All the tracks on the record are short and sweet, but with enough contrast to maintain the excitement and be distinct from one another.

The sound is made all the sweeter by the density and texture of the recording and production qualities. This technical music has been forced through the sludgy filters of heavily saturated valve amps and heavy bodied guitars, that would be synonymous with a the bluesy sound of a doom band. Mercifully not another dose of the synth-like transistorised square-wave sound of the infernal HM2! The drums also punch a full and warm snare crack with washing cymbals that don't try to slice your head off but keep the groove racing with blistering fury. The overall sound is raw, but well balanced, dirty enough to be full of energy, however still retaining distinction between the component elements.

The vocals are sunk into the wall of instrumentation, barking like a trapped and wounded man, lashing out in bitter resentment. Lyrically, influence seems to be drawn from a literary background and conjures bleak imagery, wrapped in enigmatic metaphor. The first track, a direct nod to the nihilistic outlook of Sartre's Nausea, had me reaching for google to see a little more into the thinking and influence behind the following tracks.

The only inconsistency for me lies with the last track, which is by itself a great song, but feels a little bolted on to the first five, breaking the flow with a more drawn out Crust driven approach, that yields again to technical riffing. I'm sure it will grow on me with further listens. Also, the belch at the end detracts a lot from the menace and intense mood of the record, but maybe I'm just no fun eh?

The mystery of how Exhaustion came to casually drop such a poignant comment into the conversation of UK DIY hardcore, is unravelled upon learning of some of the members' former band. You'll hear it, then read the name and it will all make sense.

I may live in a cave when it comes to the more metallic end of hardcore, but I'm sure you'd be hard pressed to find anything quite like this release currently. I'm very eager to see where they take things in the next offering.

The tape is out on Church of Fuck. It looks and sounds good. CDR version available from the band. Exhaustion are on a UK tour in October 2013. Check them out here.