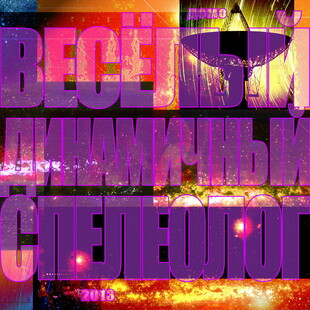 I’m not entirely sure what this record is all about hailing from ‘Barbarian Russia’ (presumably somewhere near Sochi) I got my mate Lewis to translate the liner notes and I have a feeling its two (or maybe just one) guys… Quag Creator is, definitely Vasilly and there are allusions to another person called “dirt” and they are a band, but it’s fairly confusing as to who plays what…

What I can gather it’s a concept record about the “Cheerful Dynamic Caver” and his trip to space, so there’s a start:

“One day the moustachioed caver looked at the night sky, and suddenly understood, that in this world he couldn't stand anything more. And that other mysterious, beautiful worlds are hidden in the deep, bottomless ocean of stars and galaxies. And somewhere in the very distant future She is there, she that awaits him. He knows that to see her, he will set off of on the path... "

I think my favourite track name is number three: Escaping from the Insistent (annoying) Meteor The first half is a confusing mash of prog, kind of spaced out NIN basslines, noodling guitar in an ambient backdrop- I think the drums are programmed as they are completely weird and at odds with everything else.

Later on in the record virtuoso synths kick in lending the feeling it’s someone dicking around on Dance Ejay. The whole thing is peppered by TV or film samples bleeding in and out of something which has the effect of disorientating, infuriating Bluetooth chatter on a multiplayer game. As a whole it sounds like you are playing a really old version of ‘Battlefield’ or ‘Call of Duty’ interrupted by numerous people listening to Hawkwind’s ambient freakout bits, all at once. It is indeed very evocative of the low-res horror Blade Runner cityscape on the cover art.

5/5 for batshit creativity maybe not so much for like, the music and everything.