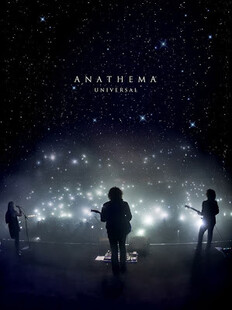 'Universal' is, rather surprisingly for a band who've been going since 1990, Anathema's first live album.

Recorded with the Bulgaria with the Plovdiv Philharmonic Orchestra in a Roman theatre and clocking in at just over 2 and a quarter hours, the band obviously figured if you're going to do a live album, make it an special event. So special, the 'pudlian miserablists actually look like they're enjoying themselves. Vincent even takes a picture of the crowd during 'Dreaming Light', although his between song banter is a little light, limiting himself to song introductions or credits to the other musicians involved, leaving brother Daniel to work the crowd with his fantastically Scouse hair.

The songs are pulled from a range of albums going back to 'Alternative 4', although the vast majority come from the bands last 2 studio albums, and while the older material benefits from the addition of orchestration and the vocals of Lee Douglas, the material pulled from 'Weather Systems' sounds almost identical to that on the record, meaning it loses something when experienced any other way than actually being at the concert. Apart from a couple of personal favourites from that record, I found the older, reworked material more involving and as a result the concert doesn't really engage until 6 or so tracks in as it's very much front loaded with 'Weather Systems' tracks. While I'm grumbling, it seems a waste that so little is made of the beautiful venue. Other than peripheral glimpses of columns, little is seen of the rather spectacular setting beyond the opening tracking shot.

If I've focused only on negative aspects so far it's been out of necessity. Fans of the band are well served here and it's a purchase I won't hesitate to make but there's nothing here beyond the concert itself, as impressive as that is. If you think you'll enjoy it, you will but there are no revelations here. The sound and playing are flawless and this is a great document as far as capturing this one-off take on a fantastic performance is concerned.

Sadly, the review copy is missing the additional Union Chapel footage so I can't say if it's a welcome addition or a tacked on extra but anything beyond the main show is a bonus.