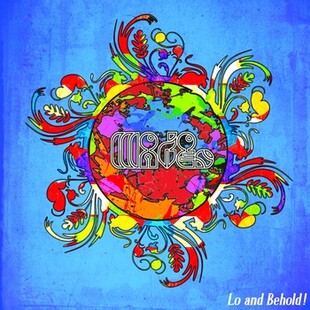 Can you imagine stoner rock crossed with the B-52s? Nope? Well take a listen to this release in the bandcamp player below and see what you make of this lot.

Finnish party rockers (there is no other way to describe them) Mojo Waves have taken Fu Manchu's lazy, laid-back approach and added a goofy, plastic inflatable sense of fun to proceedings. Like someone's shoved a bottle rocket up stoner rock's collective behinds, Mojo Waves are stratospheric from the get go.

The vocals are camp, overly exaggerated and could either come from a Blood Brothers influence or as previously mentioned, any number of camp bands from the 80s. You can imagine them all in Hawaiian shirts, playing their overly large guitars, literally bursting off the stage. Lo and Behold! jumps out the speakers with a joyful, upbeat manner that you'd be foolish to dismiss for not being serious. Some of the riffs here are also pretty head-nodding. If you can get past the vocals, there's also a pretty amazing band underneath the hard candy shell.

Skylights has a few battering ram sections, as well as being an exercise in dynamics for example and they aren't just a one-trick pony.

You can't help but enjoy these guys, Mousetrap is a drunk drag queen falling down the stairs, lipstick smeared and stilettos flying this way and that.

Abandon that fiendish bad mood at the door, Mojo Waves are here to paint a smile on your face. It might be in glitter-flecked lipstick though, be warned.