Locust of the Dead Earth Mithridate 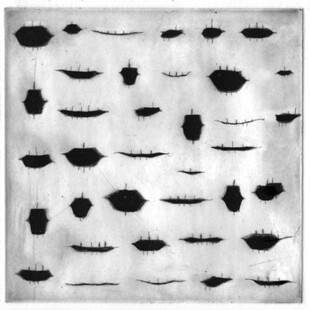 This entirely serious release is undermined from the off by the bafflingly-titled Nostril Records who have put it out, but don't let that put you off.

Locust of the Dead Earth is one person, Márcio da Cunha, a Portuguese ambient and drone aficionado no doubt.

Mithridate is an exploration in guitar and stark percussion. The release is currently available for free, with expectations that it will be available as a physical and limited release at some point in the future. Layers of guitars swell and even explode into extended sweeps at points, but at its most reflective, it sounds not unlike a less-malevolent Jesu. Think the Silver era, rather than the stumbling blind nihilism of the debut. Masked by guitar effects, the vocals are secondary and float on their own breeze in the background here. To listen to this release is to be wrapped in cotton wool and set adrift on a warm sea, it's that laid back.

Having said that, the guitars sometimes widdle themselves in circles, the elaborate and improvised-sounding licks sometimes take away from the plodding atmosphere and sound separate from the overall grey and foreboding nature I imagine is the intention here.

An Earth influence creeps in on tracks like As If I Had Thrown My Tongue Into The Gutter, that faraway and stark sound is here complimented by some aqueous sounding percussive drips that give it an empty and hollow feel. Like finding a quiet street immediately away from the hustle and bustle of a busy city, it's a section of calm.

Electronics add a sharp, digital spike to tracks like A Legion Following a Shepherd With No Eyes and the guitars are muted behind these static smears perfectly. It's like a scrambled message rebuild in the studio and comes across as having a 90s tech influence, the result of zip disks full of guitar samples corrupted and repaired to this buzzing, minimalist level.

It's certainly a work of stark genius, but those who are impatient for something of significance to occur will be left wanting...

Forums - Reviews and Articles - Locust of the Dead Earth - Mithridate