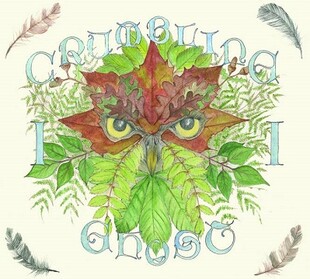 I used to think the medievalisation of doom rock was to begin and end with the supposed novelty of Circulus, a band many of us wouldn't have even heard if it weren't for Rise Above seeing fit to place them on their roster. Indeed, as mentioned in our 2007 year end poll, there wasn't a mad rush of bands looking to jump on the niche. But here we are, more than half a decade later, with bands like Royal Thunder, Purson and now Crumbling Ghost releasing classy slices of doom folk psychedelia. What's more, it's fresh sounding and richly entertaining, not simply aping Circulus' tapestry of instruments, hats and quirks.

Of course, this music has been around forever - it's the impingement into the doom world that is the changing factor, and the reason we're interested. Music inspired by some bizarre mid point between Clannad and Electric Wizard, sharing stories from the shires from a time gone by. Crumbling Ghost talk the game well, the liner notes explaining how many of the tracks here are versions of traditional folk songs from centuries past.

It's not that this is tongue in cheek poseuring, indeed it's ability to be played straight and not feel at all cringeworthy is testament to the quality on offer. On repeated listens it's slightly surprising how heavy it gets at points, edging then closer to the Black Sabbath doom drenched Blood Ceremony than the whimsical folk of others. The powerful female vocals add an ethereal and haunting atmosphere - words no doubt familiar to most descriptions of the band. It is reminiscent of Electric Mud Generator, the Leeds' mob who threatened to forge this path themselves a few years back but who seemingly lost their way a bit after the release of the excellent The Sun Will Rise album.

You could imagine this as an understated soundtrack to a bloody, jaw-agape Game of Thrones montage scene. II is a triumph, a must listen for anyone who like me have found themselves unwittingly and rather surprisingly drawn to the music of the bands mentioned above.